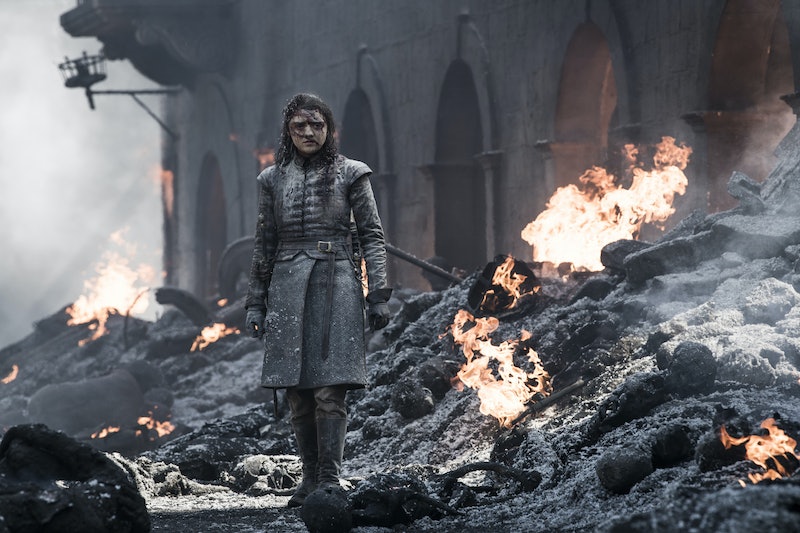 Unanswered questions about Game of Thrones are pretty much a guarantee at this point. There's too much to address in just one episode, and the spin-offs coming well after Season 8 may want to tackle the remaining Westerosi lore and material. Still, there are some major Game of Thrones prophecies that still need to be fulfilled. If they even matter anymore at all.

A couple smaller prophecies have already come true in the final season: primarily how Lady Melisandre predicted that both she and Lord Varys would perish in Westeros and that Arya would shut blue eyes forever, which she did by killing the Night King. She still has to take out the green eyes, which many fan theorists think belong to Daenerys Targaryen.

Of course, as is often the case with prophecies, there is almost always a twist of sorts. You can ask Lord Voldemort, Macbeth, and even Raven Simone all about it. Even Cersei's "Valonqor" prophecy, which was never actually stated in the HBO series, somewhat came true in "The Bells" as she and Jaime died together. In the books, that bit of Maggy the Frog's prophecy predicted that "when your tears have drowned you, the valonqar [little brother] shall wrap his hands about your pale white throat and choke the life from you."

Cersei was in fact crying, she did in fact choke to death under the rubble, and her little brother Jaime's hands were around her neck at the time.

So if they were able to make that happen, the writers can at least let a couple more prophecies that could play out in the series finale. These are the most major ones that they have yet to tackle.

Since we're counting Melisandre's various warnings as prophecies, let's revisit what she tells Gendry in Season 3 — right before kidnapping him, of course. "They are just foot soldiers in the Great War," she says to him about his beloved Brotherhood Without Banners. "You will make Kings rise and fall."

He's made plenty of Kings fall, thanks to that blood and leech spell that ensured the death of Balon Greyjoy, Joffrey Baratheon, and Robb Stark. What about rise? Melisandre was talking about Stannis at the time, and since he's dead and gone, Gendry may still have a role to play.

Having killed the Night King and ended the Long Night, was Arya Stark the princess who was promised all along? Was it Bran? In the event that the savior-ing has yet to be done, Arya did just rise out of salt and smoke after Daenerys torched the city as, Azor Ahai is supposed to in the prophecy.

When Melisandre meets Daenerys, she seems reluctant to tell the Mother of Dragons that either she or Jon Snow are Azor Ahai reborn in her opinion. All she says is that they both have a role to play in ending the Long Night and bringing the dawn. She's right, clearly, but that still doesn't tell us who the savior actually is.

Queen Of The Ashes

The above phrase, which seems to have become Daenerys Targaryen's fate, has been meme-d and referenced by disenchanted fans in light of her already infamous heel turn in "The Bells." It's actually Tyrion who advises her against becoming "Queen of the Ashes" first in Season 7. Shortly after, Olenna Tyrell gives her alternative advice: "be a dragon."

Was it a prophecy? The way Daenerys stepped out of the fire with three dragons in Season 1 feels like the start of a prophetic journey, but even Melisandre is hesitant to name her as savior.

The ashes falling on King's Landing are instead reminiscent of Daenerys' snowy vision from Season 2 in the House of the Undying. In that scene, she is reunited with Khal Drogo, and repeats a witch's prophecy about her true love's return "when the sun rises in the west and sets in the east; when the seas go dry and mountains blow in the wind like leaves." If the snow in King's Landing was really ash, does this mean Drogo is finally coming back?!

Game of Thrones rides an interesting balance between tragic flaws that resign some characters to fates they can't control, and prophecies taking a backseat to the reality of human nature. Not everything can be predicted by even the most gifted prophet, and what can (and may still) is sure to be delivered with one final twist.