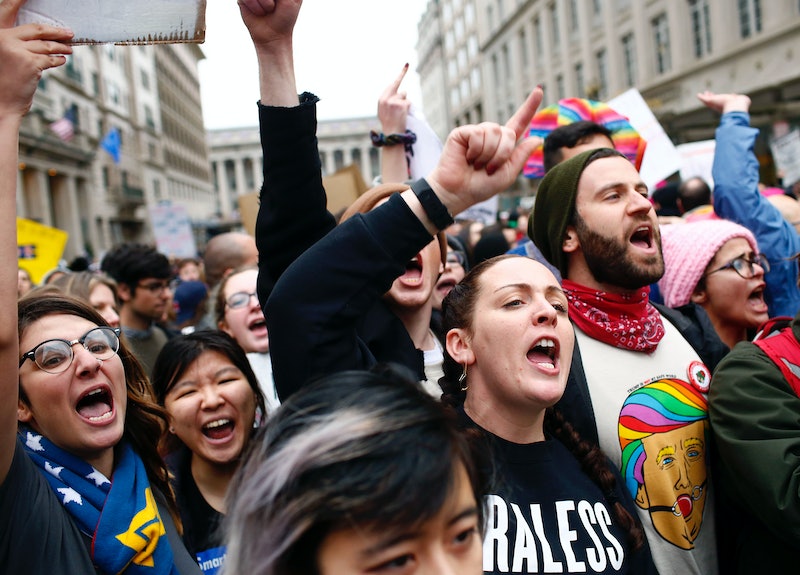 I have to wonder what kinds of questions are on the application to be Donald Trump’s press secretary. “How do you feel about the truth: ambivalent, indifferent, or contrary?” “On a scale from 1-10, how good is your poker face?” “Do you consider George Orwell’s 1984 to be a good how-to text?” Very early into his tenure, Sean Spicer demonstrated that his relationship to the truth is more casual than a pair of Chuck Taylor low-tops.

But when Spicer tried to refute that Trump’s inauguration had fewer attendees than either of Barack Obama’s, the internet collectively went NOPE. Hashtags sprung up within hours of Spicer’s bizarre Saturday-morning briefing (where he said at least five untrue statements in as many minutes, as noted by Politico), including #SeanSpicerSays and #SpicerFacts.

While Spicer’s assault on reality was offensive, many on social media were more specifically enraged by how Spicer’s blatant lies distracted the media from covering Saturday’s Women’s Marches more fully. Add to it Kellyanne Conway’s nauseating performance on Meet the Press on Sunday, when she claimed that Spicer was using “alternative facts” in his briefing. It certainly seemed like there was a concerted effort from Trump's team to obscure the power and magnitude of the Women’s Marches.

Fortunately, there were plenty of Women’s March attendees and supporters who were available to call out the press secretary’s lies while also reminding everyone that the historic event took place.

Because, perhaps in Trump's world, the only time you should be counting women is when you're tallying their scores in a beauty pageant.

2. But Maybe Spicer Had Some Inside Info The Rest Of Us Didn't

Maybe it was a real-life reenactment of the 1996 Michael Keaton cinematic masterpiece Multiplicity.

3. Not That He’s The Only One In The White House Playing It Fast And Loose

4. Of Course, Working In The Trump White House Has To Be Weird

5. Considering Who Spicer's Boss Is, Can We Blame Him?

Yeah, actually, we still can.

6. Spicer Will Probably Rely On This One To Smooth Things Over At The Next Trump-Kushner Gathering

After all, #SpicerFacts may be a great way to ease family tensions.

7. At The End Of The Day, There’s A Deeper Meaning To Spicer’s Nutty Performance

^THIS. We need to make sure Trump stays painfully aware of how many of us are against him. Keep up the good fight!