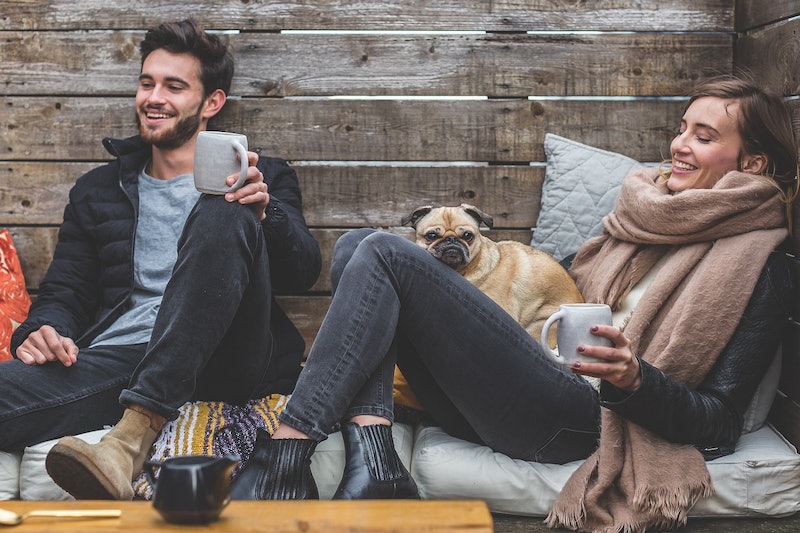 You know the saying "opposites attract"? Well sometimes that's true, but on occasion having too few commonalities just doesn't work out for a relationship. There are ways to know your relationship isn't compatible, and unfortunately, while it might be hard to end things (your feelings might be strong), it's usually a good idea to get out before it's too late. Plus, you're likely to find a new partner, one with whom you can better connect with.

As a certified health coach, I work with clients on finding positive relationships that uplift them and provide support, but I also stress the importance of finding mutual activities and values to make for a more cohesive and playful partnership. This means: Going on adventures together, enjoying some of the same foods, being on the same page with core values, sharing a sense of humor, and so on. While you can't match on all accounts (nor should you really, as it's good to have differences and be able to bring out the best in each other), things should be similar to some extent. Here are 7 signs that you and your partner might not overlap enough, which could be bad news for the relationship long-term.

Sure, you might have similar values in general (or you might be polar opposites), but if you're not willing to meet in the middle for the areas in which you disconnect, it could be a problem when more serious topics and decisions pop up. "Every relationship involves compromise, but if values are too different and neither party is willing to compromise, it may be a sign a breakup is coming," says Kimberly Hershenson, LMSW, a therapist, over email with Bustle.

2. You Won't Try Each Other's Hobbies

It's one thing to be interested in different activities, TV shows, or cuisines, and you don't have to necessarily like everything that your partner does, but if you're unwilling to try something new or do something that'll make him or her happy every once in a while, you both might be too incompatible, explains Hershenson.

3. You Have Different Sex Drives & Aren't Willing To Meet In The Middle

If your partner is like "let's go" right when you get home from work, and you need some serious effort to get in the mood, it might not make sense to stay together, as the sexual compatibility might be too far off, explains Hershenson. Plus, "if you find he is making excuses to not have sex or you're getting bored in the bedroom, this may be a sign something is up with your relationship," Hershenson adds.

4. You Don't Get Each Other's Jokes

According to Rhonda Milrad, LCSW, Founder of online relationship community, Relationup, over email with Bustle, if you don't get each other's sense of humor, it can make conversations seriously awkward. Plus, it's not likely that sense of humor will change in the future.

5. You Have Different Ideas For The Future

Marriage? Kids? Religion? City to live in? These are all big issues that require two people to negotiate, agree upon, and feel excited about sharing together. If you and your partner have differing values or opinions on where you'd like to be in the future, as an individual or as a couple, it could mean you don't enough in common, explains Milrad.

6. If You Do Want Kids, You Don't Agree On How To Raise Them

"When parenting comes into play, you can see the value clashes aloud as each partner tries to contribute to the growth of a child," says Dating & Relationship Expert Megan Weks over email with Bustle. What's more, when "parents are not facing the child as a united front, this throws off the balanced of family unit as a whole and can chip away at strength of the primary relationship," Weks explains.

7. You Don't Communicate The Same Way

Weks cautions against communicative habits being too different. "For example, I can get in a huff sometimes and my husband knows exactly when to use humor to break the thickness in the air. This is an example of a complimentary communication style. It comes down to how two people relate to one another." If you two don't match well in this area, it could make your relationship less successful in the future.

If you and your partner aren't finding enough similarities or you just can't seem to get on the same page, it could mean your relationship won't last for the long haul. Instead of waiting, it's better to discuss the differences early on and figure out where to go from there.