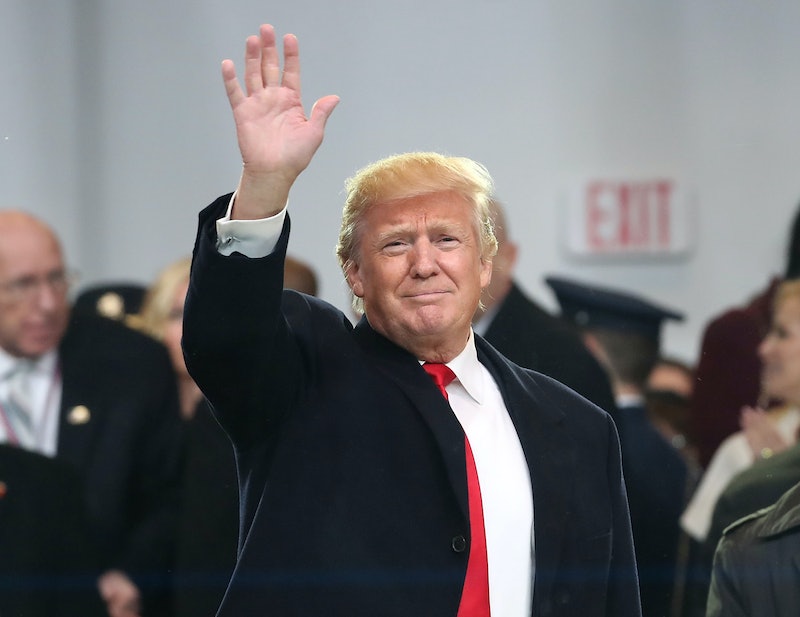 The man no one predicted would win the Republican primary was sworn in as the 45th president of the United States on Friday. While the inauguration of Donald Trump elicited mixed reactions from Americans, supporters and critics alike are now wondering what they should expect from the first 100 days of Trump's presidency.

Will the new president make good on his word or continue to walk back on his campaign promises? Will he move to undo much of his predecessor's work or focus on enacting policies of his own? Will his already historically low approval ratings continue to plummet as he solidifies his incoming administration or inch upwards as he gets to work in the Oval Office?

According to incoming White House Press Secretary Sean Spicer, Trump is looking to shake things up as soon as he steps foot in the White House. "He is committed to not just Day One, but Day Two, Day Three, of enacting an agenda of real change," the Washington Post reported Spicer told reporters on the eve of Trump's swearing-in ceremony. "And I think that you’re going to see that in the days and weeks to come."

While it's safe to say that a man who proved radically unpredictable on the campaign trail will have a presidency just as unpredictable, there are a few things you should expect to see happen in the first 100 days of Trump's presidency.

Here are some of the things you can expect to see in Trump's first 100 days in office:

Trump has promised a full repeal of President Obama's Affordable Care Act and Republicans in both the House and the Senate took the first steps toward dismantling the healthcare reform law prior to Trump's inauguration. Trump has said he'll replace the Affordable Care Act with "Health Savings Accounts," which data has found are often tied to higher out-of-pocket costs.

Expect big changes in energy policy under President Trump. The official White House website underwent a major makeover almost immediately after Trump was sworn into office. Among the changes was replacing a page on how the United States is combating climate change with a page detailing Trump's "An America First Energy Plan."

The plan promises to unravel many of Obama's climate policies and proposes increased drilling to take advantage of the "estimated $50 trillion in untapped shale, oil, and natural gas reserves, especially those on federal lands." Trump is also expected to officially announce a plan to withdraw the United States from the Trans-Pacific Partnership trade deal.

Along with rolling back Obama's executive orders, Trump is also expected to issue a few of his own. Among the executive orders Trump will reportedly sign during his first few days in office is an order "to direct the building of a wall on the southern border with Mexico."

According to Reuters, the incoming president is also expected to sign an executive order limiting the entry of asylum seekers from Latin American countries early in his presidency. In September, Trump also vowed to spend his first day in office suspending the Syrian refugee resettlement program.

While the first 100 days of Trump's presidency may not see a new justice nominated, sworn in, and sitting on the Supreme Court, Trump has promised fast action when it comes to filling the vacant seat on the nation's highest court bench. Trump said he would name a staunch conservative as his nominee to the Supreme Court "within about two weeks" of being sworn into office in a press conference held Jan. 11.

While Trump's inauguration went off without a hitch at the U.S. Capitol, protests a few streets away made it clear that not everyone was happy with the incoming president. Protests against Trump won't stop simply because he's taken his oath of office.

Saturday's Women's March on Washington is expected to bring hundreds of thousands of people to the streets of Washington D.C. in a massive demonstration against Trump's incoming administration. And while protests against Trump's administration aren't likely to last the entirety of his first 100 days in office, it's safe to say we'll see demonstrations and objections to Trump crop up again and again over the next four years.

The first 100 days of a presidency are considered to be every presidents' first major test and with that test comes an intense scrutiny of their job performance. Don't expect Trump's infamously thin skin to thicken up anytime soon. As politicians, political analysts, and the media scrutinize Trump for both his policies and personal conduct, I expect we'll see Trump rail against his critics on more than one occasion. Perhaps we'll even have a few angry tweets from the president to measure his first 100 days by.

8. A Lack Of Transparency

If you're expecting the presidential oath of office to suddenly give Trump a change of heart when it comes to adhering to even the most basic standards of transparency, then you're also still probably expecting him to release his tax returns. While the majority of American voters have come to expect a certain level of transparency from their public officials, Trump has so far shown a gross disdain for that kind of accountability. His failure to divulge his tax returns or divest himself of his business, opens the door for a number of potential conflicts of interest to follow him into the White House.

If Trump's inauguration address was any indication of what his presidency will be like, it's more than likely that America will see more fear-based policy ideas. While past presidents have used their inauguration addresses to send uplifting messages of hope, Trump chose to center his address around the principle message of his campaign - fear. In describing what he called "American carnage," Trump pained a grim picture of the nation, one he'll likely use to try and drum up support for the policies he rolls out during his presidency.