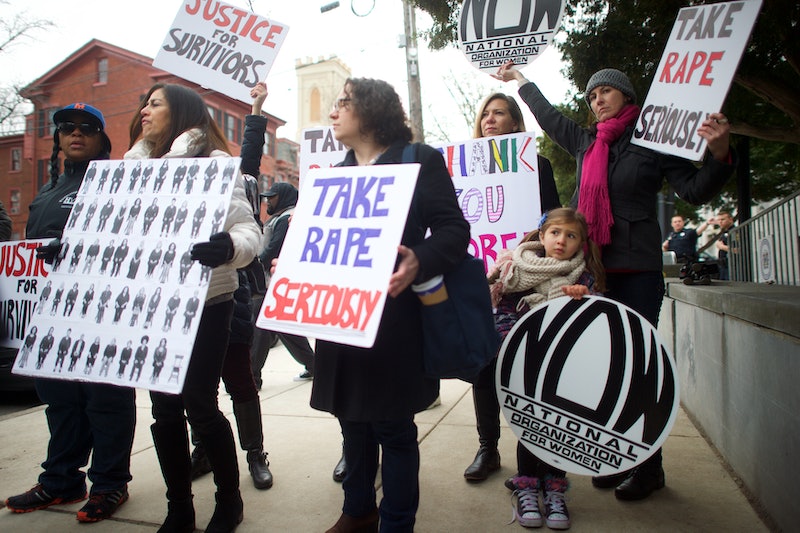 Last week, a judge handed down a sentencing for a bus driver who pleaded guilty to raping a 14-year-old girl he drove — and that sentencing has since enraged people across the country. Judge James P. McClusky ruled that 26-year-old Shane Piche should receive 10 years of probation and no jail time, despite the fact that he pleaded guilty to rape in February. What's more, because of the details around McClusky's ruling, Piche won't even show up in sex offender online databases.

Piche was initially charged with rape in June 2018, along with "first-degree unlawfully dealing with a child and endangering the welfare of a child after allegedly providing the youth with alcohol," according to Julie Abbass of Watertown Daily Times. In February, he pleaded guilty to third-degree rape. Then, last Thursday, McClusky determined that Piche would get the allotted probation and no jail time; Piche also will be required to register as a Level 1 sex offender, the lowest risk level possible, despite the fact that the district's attorney office requested he receive Level 2 status, according to the Watertown Daily Times. As a result, he'll have to register as a sex offender, but people won't be able to see his name in online search databases.

Per the publication, McClusky handed down the sentencing last Thursday, explaining that he made his decision partially because Piche has no prior arrests, and because there was only one victim designated in the plea deal. Now, people are speaking out about the ruling.

Shane Piche, white, admitted to raping a 14 yr old girl. He will do NO jail time. 16 yr old Kaleif Browder, African American, spent 3 yrs on Rikers Island awaiting trial on an accusation that he stole a backpack. Much of the time was spent in solitary confinement.

Qasim Rashid, who is currently running for the state Senate in Virginia, tweeted,

This man, Shane Piche, raped a 14 year old girl on her bus route & the judge gave him ZERO JAIL TIME.... Crystal Mason got 5 years for accidentally voting ... Patrick Beadle got 8 years for medicinal pot ... This is white supremacy in our CJ system. Horrific.

The response to the ruling is not unlike the waves of shock and anger that reverberated through the country when former Stanford swimmer Brock Turner was given a sentence of six months of jail time for sexually assaulting an unconscious woman in 2015. Per The New York Times, Turner only ended up serving three of those months. His case has since become a cornerstone in the conversation about the treatment of sexual assault accusations and situations on campus.

Though many are outraged, Piche's lawyer, Eric Swartz, argued on Thursday that the punishment handed down to his client was fair. Swartz said in a statement acquired by The New York Daily News,

If you're upset by Piche's lenient sentencing, you can sign a petition to recall McClusky. The petition, launched on Move On, can also be shared on your social media accounts if you want to spread the word.