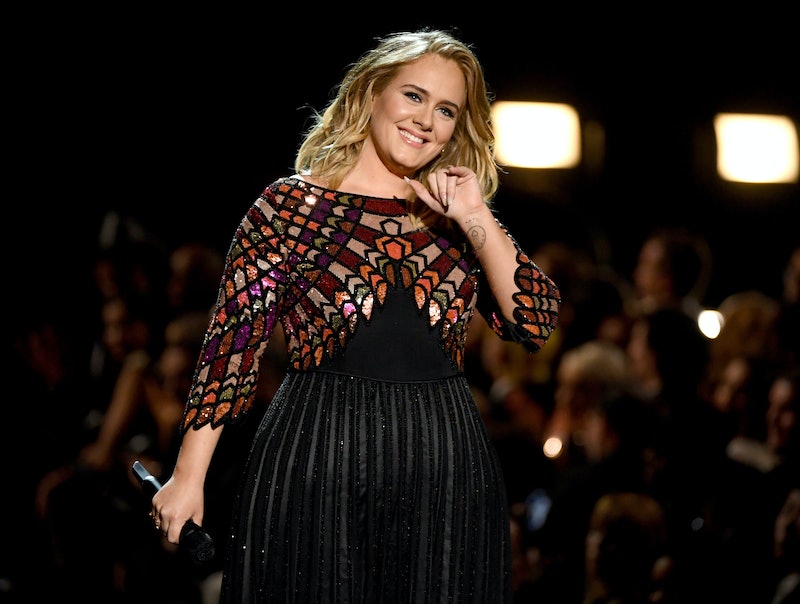 If you were wondering whether or not Adele was still as fabulous as she's always been, the answer is a huge yes. On Instagram on Wednesday, Adele shared a meme of herself. This is her first Instagram since she and Simon Konecki announced their split in April. The fact that Adele posted a hilarious and uplifting meme of herself shows that she's coping with her unfortunate situation the best that she can and, most importantly, with a sense of humor.

As you can see below, the meme Adele shared shows a photo on the left of the "When We Were Young" singer crying at an event. Then, on the right, there is an image of her during her Carpool Karaoke segment with James Corden looking all badass. The meme is captioned,

"When you catch yourself in your feelings then you remember who you are."

And this is why pretty much everyone loves Adele. It's unclear if this is a direct response to her breakup, but it seems to be Adele's way of saying that she's been dealing with a lot of emotions, and understandably so. Furthermore, the Grammy winner appears to be telling her fans not to worry, because she's OK.

As for the Oscar winner's separation from Konecki, their split was announced on April 19. Bustle also confirmed this news via the singer's rep. The following statement was released to the Associated Press:

"Adele and her partner have separated. They are committed to raising their son together lovingly. As always they ask for privacy. There will be no further comment."

Adele and Konecki were married for three years and were together for a total of seven years. They also have a son, Angelo, together, who was born in October 2012. When their breakup was announced, it was certainly sad news. Who doesn't want Adele to be blissfully in love? That said, maybe the two going their separate ways what was best and is what they both need to be happy. Whatever the case, they haven't commented any further than the statement provided above and Adele's Instagram.

As you can probably imagine, Adele's fans are loving her Instagram. Like one Twitter user shared on Wednesday, "Adele, ladies and gentlemen, the meme legend we never knew we wanted." Another Adele fan posted, "Adele's first post since her separation is so perfect and so Adele."

There are so many Adele memes, so for the musician to post one of herself is truly genius. She really is the best and has such a fantastic sense of humor to be able to seemingly address her situation by poking fun at herself. This is one of the many reasons why Adele is beloved by many.

It's also nice to know that she recognizes just how strong she is. It's definitely difficult to raise your spirits through sadness and heartache, but Adele seems to be trying to do exactly that. If anyone can instill confidence in herself, all while letting herself know she can get through this, it's Adele.