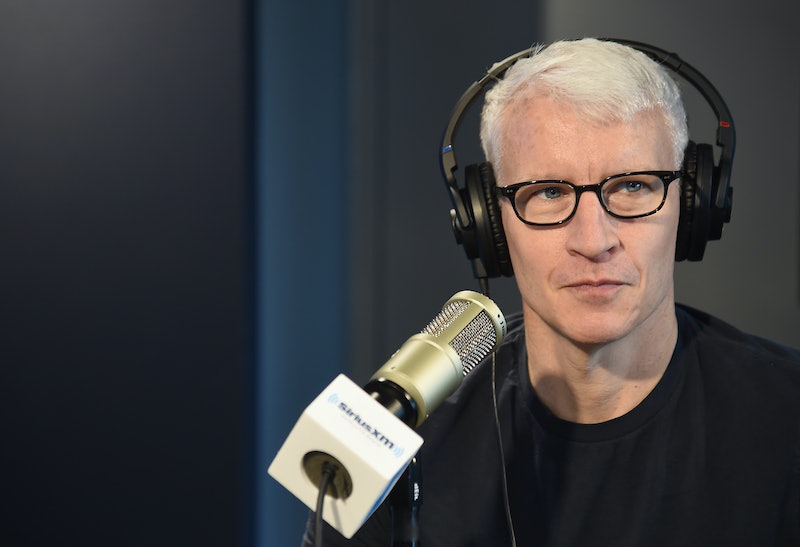 As the saying has gone during the Trump administration, there's a tweet for everything. As it turns out, though, as far as Bob Woodward's new book about President Donald Trump is concerned, you don't even have to go back to a years-old tweet to find the president contradicting himself. CNN anchor Anderson Cooper used Trump's call with Woodward to show exactly how quickly Trump's opinion has changed on the legendary reporter.

On Tuesday, news dropped about a bombshell book that Watergate reporter Bob Woodward wrote about Trump and his administration. Among the book's explosive claims were that, as CNN wrote in their account of the book, that top staffers and cabinet members would steal papers off Trump's desk in order to keep him from signing them. The Washington Post, in their coverage of it, wrote that former Trump lawyer John Dowd believed that keeping Trump from testifying in front of Mueller was a matter of national security. The book's title is Fear: Trump in the White House — and just from that, you can probably guess that it doesn't contain a lot of positive coverage.

Along with their highlights from the book, though, the Washington Post also published the transcript of a call between Woodward and Trump — and as Cooper pointed out in a segment on CNN on Tuesday, Trump seemed to have a high opinion of the reporter during that call.

During the phone call, Trump expressed his regret that "nobody told [him] about" Woodward trying to get in touch for an interview — a fact which, as Cooper pointed out in his segment, Trump later admitted was a lie — and then told Woodward that "You know I’m very open to you. I think you’ve always been fair."

As Cooper noted, though, the contents of the series of tweets that Trump sent out about Woodward after coverage of the book was released.

"The Woodward book has already been refuted and discredited by General (Secretary of Defense) James Mattis and General (Chief of Staff) John Kelly," Trump tweeted on Tuesday. "Their quotes were made up frauds, a con on the public. Likewise other stories and quotes. Woodward is a Dem operative? Notice timing?"

In another, Trump refuted a claim of Woodward's about an insult the reporter claims Trump directed at Attorney General Jeff Sessions.

"The already discredited Woodward book, so many lies and phony sources, has me calling Jeff Sessions 'mentally retarded' and 'a dumb southerner,'" Trump wrote. "I said NEITHER, never used those terms on anyone, including Jeff, and being a southerner is a GREAT thing. He made this up to divide!"

Trump also opened Wednesday morning with a tweet directed at Woodward. While this tweet didn't mention Woodward by name, it did insinuate that Woodward should be punished for his work.

"Isn’t it a shame that someone can write an article or book, totally make up stories and form a picture of a person that is literally the exact opposite of the fact, and get away with it without retribution or cost," Trump tweeted. "Don’t know why Washington politicians don’t change libel laws?"

Cooper didn't bring in any old evidence, but Trump hasn't always thought so ill of Woodward. In a tweet from 2013, Trump effectively gave Woodward a vote of confidence, writing, "Only the Obama WH can get away with attacking Bob Woodward."

As Cooper said on his show regarding Trump's phone call with Woodward, “So who are you going to believe on this one? President Trump... or President Trump?"