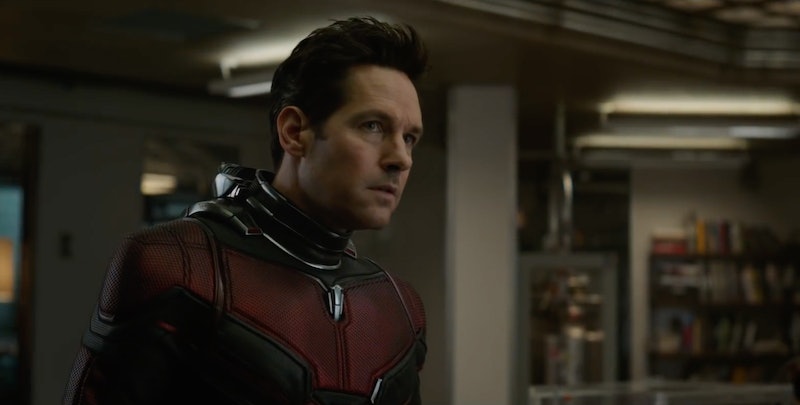 There's a strong chance you've wailed your way through all three hours and two minutes of Avengers: Endgame by now, which means it's time to comb through some of the finer details (in case you haven't? Significant spoilers ahead.) One such finer detail: Avengers: Endgame has a Doctor Who connection, subtle enough that it might have escaped the attention of even the most committed of Whovians.

The Radio Times sets it out: Paul Rudd's Ant-Man inspires the remaining Avengers' plan to undo Thanos' devastation, requiring them to travel back through time and obtain the Infinity Stones before Thanos destroys them. Ant-Man, source of much of the film's humour, christens the plan the "Time Heist."

And "Time Heist" also happens to be the name of a Doctor Who episode from the Peter Capaldi era. In the Doctor Who episode, Capaldi's Doctor and Jenna Coleman's Clara, as well as Pippa Bennett-Warner's Saibra and Jonathan Bailey's Psi, must break into a maximum security bank, guarded by the telepathic Teller — which bears an admittedly loose similarity to the Avengers' plot, but a similarity all the same.

What's more, this isn't the first Doctor Who echo from the Avengers films — or even the first from the Avengers films featuring Thanos. As the Radio Times points out, perhaps the most gut-wrenching moment of Infinity War — Peter Parker's final words before dissolving into dust — directly quoted the final moments of David Tennant's Tenth Doctor, whether intentionally or not. As Tom Holland's Spider-Man collapses, he tells a frantic Tony Stark, "I don't want to go." And longterm Whovians will recall the Tenth Doctor saying exactly the same before regenerating, giving way to Matt Smith's Eleven.

Feel free to draw your own conclusions: Is there a Whovian in the Marvel writers' room? Or are the subtle references mere coincidence?

While we're on the subject of Doctor Who, how about that 12th series? Series 11, Jodie Whittaker's debut season as the titular Time Lord, started in October 2018 and concluded the following December, while the last episode to air was the New Year's Day 2019 festive special. Alas, in case you're not already aware, that doesn't mean you can expect a new season this October. Back in December, the BBC confirmed that series 12 would air in "early 2020" — meaning (almost) a whole year with no Doctor Who.

Showrunner Chris Chibnall said in a statement, "We’re off again! Well we never actually stopped — as Jodie Whittaker’s Doctor and friends have been winning the hearts of families across the nation this autumn, we’ve been busy with a whole new set of action packed adventures for the Thirteenth Doctor. We adore making this show and have been blown away by the response from audiences, so we can’t wait to bring more scares, more monsters and more Bradley Walsh, Mandip Gill and Tosin Cole to BBC One."

With almost an entire year to wait for more Doctor Who? Any Marvel references to the classics are very much appreciated.