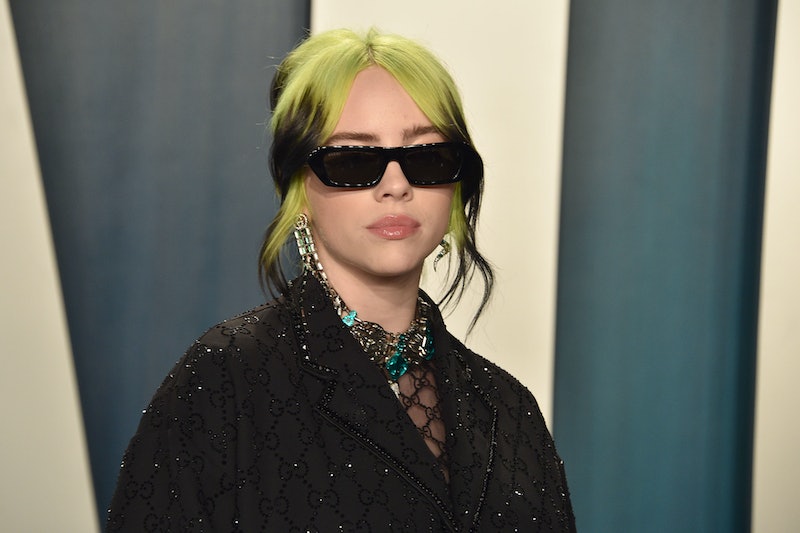 Both Justin Bieber and Billie Eilish have spoken about the toll that becoming world famous can take on a teenager, so it's not surprising that the pair have bonded over the experience. After the Changes singer promised to "protect" her in an emotional interview, Billie Eilish responded to Justin Bieber with a message of support for his new album on Instagram. During a recent conversation with Zane Lowe for Apple Music's Beats 1, Bieber reflected on his break from the spotlight, before adding that he wants Eilish to avoid some of the pitfalls he experienced.

"I just wanna protect her, you know?" the singer said, according to a clip from the interview that Eilish shared on Instagram. "I don’t want her to lose it. I don’t want her to go through anything I went through. I don’t wish that upon anybody." Though he noted that he didn't want to "force" a relationship with her, Bieber also wanted the Grammy winner to know that he would always make time to help her.

"I’m just a call away," he said. "[I’ll] let her do her thing and if she ever needs me, I’m gonna be here for her." In response, Eilish encouraged all of her social media followers to support Bieber and "stream changes." The post also included several photos of Eilish showing off her past as a Belieber, including snaps of herself wearing a "Justin Bieber" shirt and a collection of Bieber posters covering the walls of her childhood bedroom.

Eilish has long been open about her love of Bieber and his music when she was growing up; in February 2018, she told Marie Claire that she was "in love" with the singer when she was a young teen. "It wasn’t like I was just a fan, man," Eilish said, before revealing that she wouldn't want to meet Bieber because "I don’t want to cry in front of him." A month later, she told Billboard that she even ran "a fan account" for Bieber before becoming famous, which he referenced when he eventually followed her back on Instagram and sent her a message. "The first thing he DMed me was a screenshot of — I guess he scrolled up and saw a message I had sent in 2014," Eilish revealed.

Despite that proclamation, Eilish did eventually come face-to-face with her teenage crush at Coachella in April, where she was so overwhelmed with emotion upon meeting him. After their brief meeting, Bieber proved that the love was mutual, sharing a photo of himself and Eilish on his Instagram Story and declaring that the younger star has a "long and bright future ahead of you." In July, Bieber even teamed up with Eilish to record a remix of her Grammy-winning single, "Bad Guy," which she released alongside a photo of her younger self posing in front of her many Bieber posters.

In the interview with Lowe, Bieber revealed that seeing Eilish become "a superstar" before the age of 18 — and then meeting her at Coachella — inspired him to offer her the support that he didn't have growing up in the spotlight. "It was hard for me, being that young and being in the industry and not knowing where to turn," Bieber explained, adding that he "just wanted to be a good example," for the younger singer.

Eilish went from being a Bieber superfan to becoming a pop superstar herself, and having seen everything that her idol endured in the spotlight allowed the pair to form a genuine friendship. Sometimes it really does pay to meet your heroes.