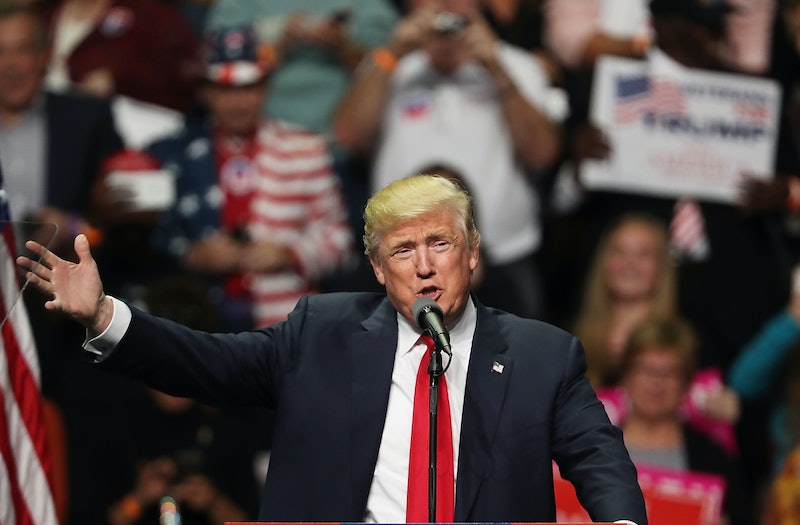 Following a week of seemingly never-ending executive orders, President Donald Trump announced that he's made his pick for a nominee for the empty Supreme Court seat. On Tuesday night, Trump will tell America who he wants to appoint to the position, but that won't be the end of the process. Indeed, Democrats have vowed to fight Trump's pick, mirroring the resistance that Republicans put forth for Barack Obama's nomination of Merrick Garland. But is it possible for Democrats to filibuster Trump's Supreme Court Pick?

The answer is yes. In 2013, Democrats eliminated the option to filibuster on most presidential nominees, but not for the Supreme Court. So filibustering is in fact on the table for the Senate Democrats to try to block Trump's pick.

Ahead of Trump's nomination announcement, Democratic Sen. Jeff Merkley told Politico that he plans to filibuster any of Trump's nominations that are not Garland. Merkley could hold a filibuster that would require Republicans to push Trump's pick through with a 60 vote majority. In order to do so, he would need 41 Democrats to join him in this quest, which is not guaranteed to happen, especially considering some Democrats elected in states that went to Trump are up for reelection in 2018. Meanwhile, Senate Minority Leader Chuck Schumer told CNN that he would oppose any of Trump's Supreme Court picks who are "out of the mainstream," meaning someone who would get bipartisan support.

Whether Senate Democrats would sign on with Schumer and Merkley is unknown, but many are likely still angry that Republicans refused to confirm Obama's Garland for 10 months until Obama's term ended and he no longer had a say.

The last time a filibuster occurred for a Supreme Court nomination was in 2006 when the Senate Democrats (including Obama) tried to filibuster against Samuel Alito, who was appointed by President George W. Bush. It failed, and Alito was confirmed.

Even if Democrats filibuster, the Senate Republicans also have an option to avoid a filibuster by changing Senate rules that would eliminate the 60-vote minimum for Supreme Court nominees. This would likely serve as a last option for Republicans, if they can't convince eight Democrats to vote with them for the nominee. Considering 10 Democrats in red states are up for reelection in 2018, according to CBS, Republicans would likely try to get them to swing to their side first.

Ultimately, who Trump actually picks will probably be the greatest deciding factor for most Democratic senators. So, until the announcement comes, we'll have to wait to see how part of the Senate will react, and what they'll do.