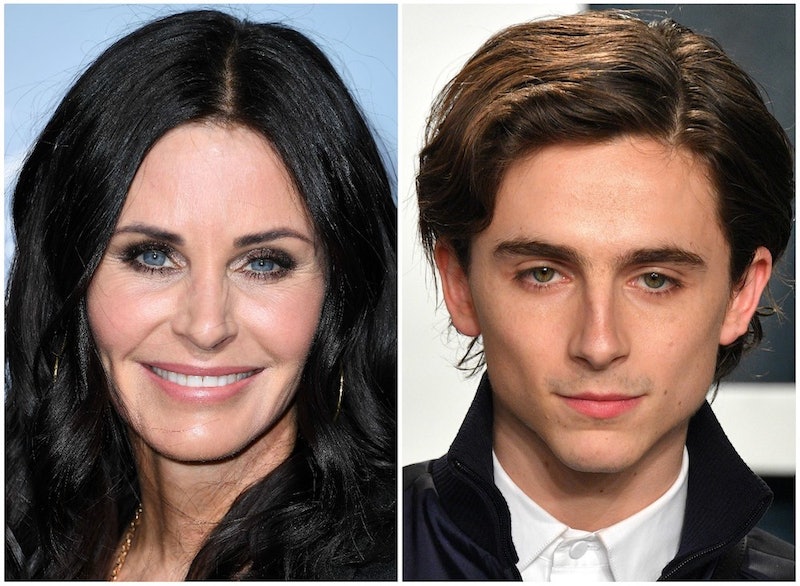 The One With the Little Women Star: Courteney Cox would cast Timothée Chalamet in a hypothetical Friends reboot. Cox appeared on comedian Kevin Nealon’s YouTube series Hiking with Kevin on Thursday, Feb. 27 to dish about HBO Max’s highly-anticipated Friends reunion — and revealed that she would dream cast the Call Me By Your Name star as Joey Tribbiani, the show’s resident meatball sub enthusiast and former Days of Our Lives actor portrayed by Matt LeBlanc for 10 seasons.

“Timothée Chalamet can be Joey,” Cox told Nealon while the two hiked a scenic Malibu canyon. She added, “He’s so great.” When Nealon noted that Chalamet even “looks a little like Joey,” too, Cox said, “I know.” Later in the clip, Nealon and Cox agreed that Jonah Hill would make a promising Ross Geller, as originally portrayed by David Schwimmer.

Cox also shared insights into HBO Max’s Friends reunion special, which was announced last week. “We’re gonna all get together for the first time in a room and actually talk about the show,” she told Nealon. “I’m so excited. It’s gonna be a great time. We really haven’t all done that and actually sat there… and reminisced about this incredible experience that we had.”

Cox’s interview comes after HBO Max announced on Feb. 21 that the series' titular six stars will reunite for an unscripted special. Along with the special, all 10 seasons of Friends will be available on HBO Max, set to launch in May. In a statement sent to Bustle, HBO Max president Kevin Reilly said, in part, “Guess you could call this the one where they all got back together — we are reuniting with David, Jennifer, Courteney, Matt, Lisa, and Matthew for an HBO Max special that will be programmed alongside the entire Friends library."

The statement continued, "I became aware of Friends when it was in the very early stages of development and [...] have delighted in seeing it catch on with viewers generation after generation... [W]e think this reunion special will capture that spirit, uniting original and new fans.”

The reunion special announcement came a few months after the NBC sitcom celebrated its 25th anniversary last September. On Instagram at the time, Cox and her fellow Friends co-stars celebrated the milestone with similar Instagram photos and captions. “Celebrating a Thursday night 25 years ago,” Cox captioned her post. “Thank you to all of our loyal fans across the world. You’ve certainly been there for us! ♥♥♥♥♥ I love these guys!”

More like this
Netflix Reveals First Look At Wednesday In The 'Addams Family' Spinoff Series
By Bustle Editors
The Bling Ring's Alexis Neiers Has Come A Long Way Since Her 'Pretty Wild' Days
By Sophie McEvoy and Arya Roshanian
'Survivor' Is Finally Coming Back To UK Screens
By El Hunt
24 Years Ago, 'Friends' Dropped Its Most Underrated Ross & Rachel Episode
By Grace Wehniainen
Get Even More From Bustle — Sign Up For The Newsletter