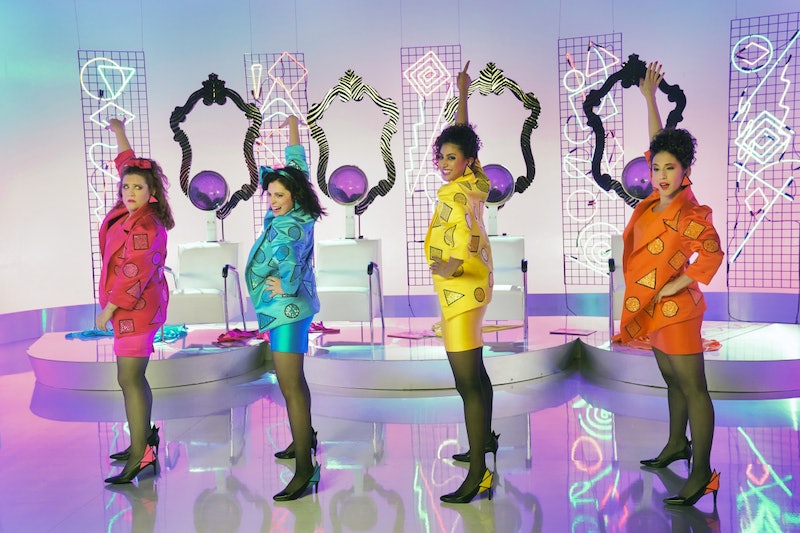 Rebecca Bunch is back, and she brought the anthem the internet needs right now along with her. Crazy Ex-Girlfriend's "Let's Generalize About Men" isn't just perfect for the situation Rebecca finds herself in at the beginning of Season 3 — trying to plot revenge against Josh for leaving her at the altar — it also captures the current mood of plenty of people in the real world. Men aren't actually the worst, but as Rebecca and her best girlfriends sing, "Let's conflate all the guys, let's generalize about men!"

The song has taken the Twitter world by storm. It seems Rebecca, Paula, Valencia, and Heather's ode to the time-honored tradition of getting drunk with your friends and complaining about the opposite sex resonated with viewers. And why shouldn't it? The song is clearly satire, so there's no need to break out any "not all men" hashtags. It's not a song about how all men suck, but it is a song about how broken hearts and frustrations with the man in your life can lead to an evening of comparing stories of male awfulness with your best friends. (Come on, men of the world, you know you do it too.)

One of the highlights comes when Rebecca asks, "Hey what about gay men?" And the ladies praise the awesomeness of gay men, poking fun at the gay best friend stereotype in the process. "So let's focus for now on straight men," the women sing after establishing that gay men are all "adorable and fun."

Everything, from the sentiment to the amazing '80s pop power anthem style, hints at a less enlightened version of feminism that was embraced by pop culture during the era of big hair and shoulder pads. Feminism has evolved quite a bit since then, but just like it was for the many women who came before, drinking and complaining about men is a ritual that you've probably partaken in at least once. That's one of the reasons why "Let's Generalize About Men" has made the Twitter-sphere so happy — it's hilarious and so real it hurts.

And given just how relatable it is, the internet is so here for it.

People Are Declaring It Their New Favorite Song

This just proves that some people have exquisite taste in music.

And Revealing That It Captures Their Current Mood Flawlessly

Sorry, men, but everyone needs this right now.

Some People Pointed Out The Catharsis Factor

If you've been paying attention to the news cycle, then you know the last few weeks have been frustrating on every level, and this wonderfully silly song landed at the perfect time to give people some feelings that aren't just anger and sadness.

Others Celebrated Its Catchiness

Leave it to Crazy Ex-Girlfriend to give the world something to sing about.

Seriously, just watch it already. It's almost impossible not to love, and there are socially relevant musical numbers every single week.

The Perfect '80s Homage Was Not Lost On Fans

The show couldn't have chosen a better musical style for this number.

Thanks for sending some good vibes out into the universe, Crazy Ex-Girlfriend. It was much appreciated. And hey, if anyone needs a few more, then just check out this behind the scenes video of the cast rehearsing the song.

Yes, even the men in the room are cracking up.

"Let's Generalize About Men" arrived at the exact moment it was needed most. It deserves all of the love it's getting and more for giving fans an anthem that speaks to their souls in the funniest way possible.

More like this
Everything To Know About Taylor Swift’s 10th Studio Album, 'Midnights'
By Grace Wehniainen and Jake Viswanath
Kanye West Apologizes To Kim K "For Any Stress I Have Caused" In Rare Interview
By Jake Viswanath
Jason Derulo Is Launching A New Singing Show In The UK
By Maxine Harrison
'School Of Rock' Changed Joe Keery's Life Forever
By Alyssa Lapid
Get Even More From Bustle — Sign Up For The Newsletter