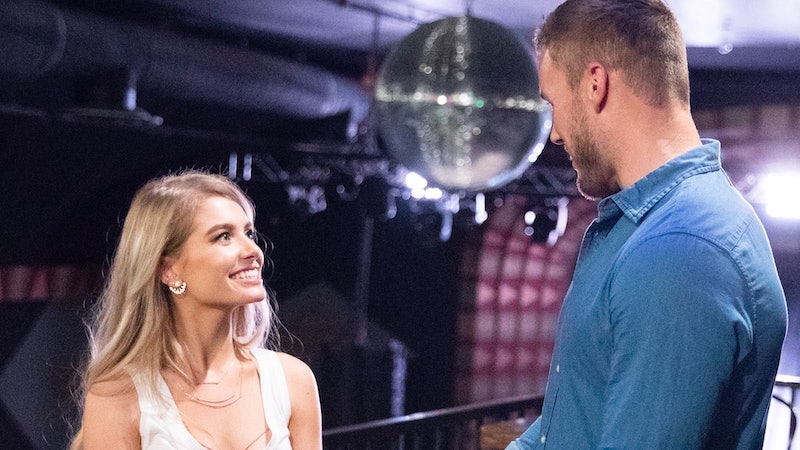 Hannah Brown's season of The Bachelorette hasn't even started yet, and there's already speculation about which guys will go on Bachelor in Paradise. Hannah's good friend Demi Burnett admitted she's preparing to run Bachelor in Paradise. And, yes, that includes scoping out the guys on Hannah's season. She didn't even have to wait like the rest of us to see the first episode.

In an interview with Entertainment Tonight, Demi opened up about showing up for Hannah's first night as the Bachelorette. She and fellow Bachelor Season 23 contestant Katie Morton were stationed in a surveillance van, watching and listening to the conversations Hannah has with the contestants.

Of course, she's there to scout out men for her friend. Still, in the interview with ET, Demi admitted, "I mean, if I do go to Paradise, like, I definitely was scoping them out, and I was like, 'Hannah, save that one for me!'" Who could blame her? Hannah can only end up with one guy at the end of her season. The rest should be fair game for the BiP girls.

Demi hasn't officially confirmed that she will be on the show this summer, but it seems like a safe bet. She has a very specific vision for the season. She even declared, "We're renaming it Demi-dise if I go. I'm going to run that beach. I gotta be the queen." If anyone could actually pull that off, it's Demi.

Demi also said, "You know me; it's going to be really fun. I'm just going to have a lot of fun." Well, that's a given. If she goes, which again seems very likely. She even has a strategy in mind to make the most out of the experience. Demi revealed, "I'm going to be open-minded and I'm not going to, like, jump into something right away. I think I need to weigh out all my options." That's a good approach.

Then Demi explained why she doesn't want to get booed up immediately. She shared,

"I think it would be easy to get really involved with someone right away, but then it's Paradise, and people can come in later, so what if someone comes in later? I just need to keep it open and play the field."

In a March 6 interview with Glamour, Demi opened up about the possibility of continuing her reality TV journey on The Bachelorette or Bachelor in Paradise. Of course, she's not the Bachelorette lead, but BiP is still an option.

Nevertheless, it wasn't her ideal situation. Demi told Glamour, "I think both of them are opportunities that could result in a relationship or more self-discovery, but it is slightly offensive when people are only thinking Paradise, Paradise, Paradise." Why does that offend her? Demi went on to explain,

"They think I’ll be so fun there, but I have a better shot at finding somebody on The Bachelorette. I'd have more guys who would be loyal to me, whereas in Paradise a new girl could walk in at any second and they’ll just dump me and I’ll be hurt all over again. So that’s just kind of the struggle there. But I’m open-minded, so we’ll see."

In that same interview, Demi was asked if she felt like she wasn't taken seriously. She admitted, "I think that part sucks—being considered to be in Paradise because people can’t take you seriously, but I think people in general need to stop taking everything so seriously."

Demi is bound to thrive whether she finds love or not, but at least she has a head start on getting to know the possible contenders.