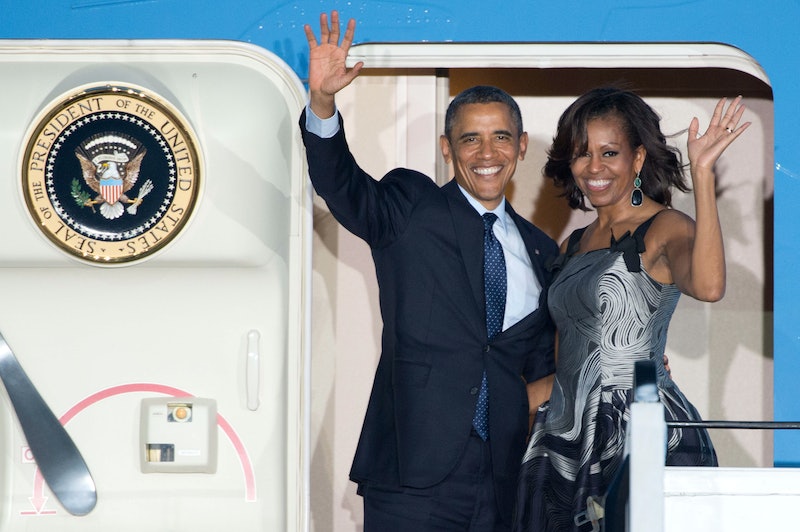 Back in May of 2018, the news dropped that Barack and Michelle Obama were teaming up with Netflix to produce a series of projects over the next several years. At the time, though, there was no indication of what they'd actually be working on. Now, the wait is over. Details of the Obamas' deal with Netflix have now been announced, and currently there are seven different projects in the works — and you're going to want to put all of them onto your Netflix queue.

“Touching on issues of race and class, democracy and civil rights and much more, we believe each of these productions won’t just entertain, but will educate, connect and inspire us all,” President Obama said in a statement, according to The New York Times.

The New York Times first reported that the Obamas were working on a deal with Netflix in March 2018, which immediate piqued a ton of interest in the project — although at the time, their team gave only vague statements about what the productions would touch on. They officially signed a contract with the international media company in May 2018, eliciting a predictably divided response. While many immediately celebrated the news, others responded by pledging to drop their Netflix accounts.

In total, the Obamas' production company Higher Ground is working on three feature films and four television series, one of which is for young children, according to The Hollywood Reporter. The first to be released is American Factory, a documentary about a Chinese-run company opening a factory in Ohio, as The Hollywood Reporter — and it already won an award at the 2019 Sundance Film Festival for directing.

The other two movies will be a film version of a Pulitzer Prize-winning biography, Frederick Douglass: Prophet of Freedom, and Crip Camp, a documentary about how the disability rights movement began, according to The New York Times.

Three of the four series produced by Higher Ground will also be nonfiction. The one drama in the bunch will be Bloom, which will explore the post-war fashion industry in New York from the perspective of women and people of color, according to The New York Times.

The other three series will be Overlooked, a project based on the New York Times recurring feature celebrating people whose obituaries the paper didn't publish; Fifth Risk, a show about government bureaucracy, based on a book by Michael Lewis; and Listen to Your Vegetables and Eat Your Parents, a children's show aimed at promoting travel and healthy eating, according to USA Today.

“We love this slate because it spans so many different interests and experiences, yet it’s all woven together with stories that are relevant to our daily lives,” Michelle Obama said, according to The Guardian. The projects are all at different stages of development, and you'll start to see them gradually over the coming years, according to The Hollywood Reporter.

“We think there’s something here for everyone — moms and dads, curious kids, and anyone simply looking for an engaging, uplifting watch at the end of a busy day," Michelle Obama continued, per The Guardian. "We can’t wait to see these projects come to life — and the conversations they’ll generate.”

More like this
12 ’90s Movie References You Missed In 'Do Revenge'
By Radhika Menon
What’s New On Netflix: Ana De Armas’ 'Blonde' & A Nick Kroll Special
By Arya Roshanian
These 25 International Horror Movies On Netflix Prove Fear Is A Universal Language
By Bustle Editors
Here’s Everything Coming To & Leaving Netflix In October
By Jake Viswanath
Get Even More From Bustle — Sign Up For The Newsletter