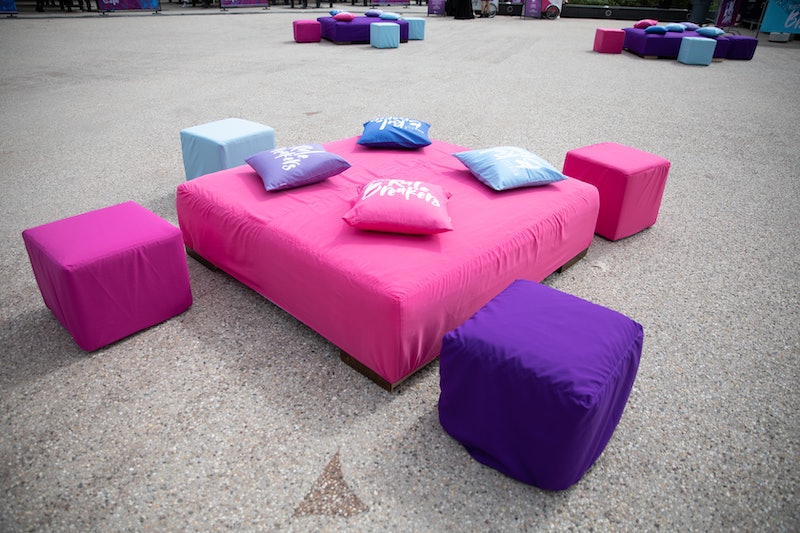 Laurel Thatcher Ulrich's quote, "Well-behaved women seldom make history" is one that you've probably heard many times in your lifetime. It's been inscribed everywhere from Instagram captions to endless Etsy merch, but extending the quote beyond its limitation to "women," the words feel particularly resonant today at Bustle's first Rule Breakers event, a day that's all about celebrating female and non-binary rule breakers everywhere. As attendee Brittany Miller said, "I'm entitled to have a voice that's just as loud as everyone else's, even as a black person, a woman, and being queer...being out loud about who I am in all those minority identities is the rule I'm most proud to have broken."

The quote was first coined in 1976 by Ulrich, a Pulitzer-winning historian and Harvard professor, and just like how the quote became a slogan for people hoping to break the mold, Rule Breakers is a space for people to share their own ways of breaking the mold in their day-to-day lives. In the spirit of the event, we spoke to attendees to ask what rule they are proudest to have broken in their lifetime, no matter how big or small their acts of defiance were. And their responses were every bit as amazing as you would expect. One attendee, Hadassah Williams, revealed, "I broke a rule about the idea of education, of what you can accomplish and how it can be made. I wasn't doing well in high school at all...I went through pain and it was a lot for me, but I found my way back around — that's the rule I broke."

These are just some of the ways that event attendees have broken the rules, and made the world a better place in the process.

"In the 6th grade, one of my teachers was so terrible, she reminded me of Professor Umbridge from Harry Potter. Her way of teaching was always just reading the textbook to us. I had a question about something in the textbook one day, and she ignored me and just continued reading it as her answer. So I got frustrated and I said, ‘No, can you actually teach us?’

It didn’t feel like I was breaking a rule at the time, but people came up to me later in the hall and high-fived me for speaking out.”

“Just that I try to continually remind myself not to hold myself to specific standards because I’m a woman.”

It ended up being an incredible spread with really great feedback. We got in a little bit of trouble, but the magazine is still standing."

Hadassah: "Education. I ended up dropping out of high school for some time and then entering an alternative school. I broke a rule about the idea about education, of what you can accomplish and how it can be made. I wasn’t doing well in high school at all...I went through pain and it was a lot for me, but I found my way back around — that’s the rule I broke."

Brittany: "The rule that I’m most proud to have broken is being very present, being very open, and being out loud about the identities that I have.

A lot of minority communities, whether you’re a sexual minority, a gender minority, a racial/ethnic minority, there are a lot of expectations. And there are consequences for breaking the expectations of remaining in the box society puts you in. So being out loud about who I am and feeling like I'm entitled to occupy space, I'm entitled to have a voice that's just as loud as everyone else's, even as a black person, a woman, and being queer...being out loud about who I am in all those minority identities is the rule I'm most proud to have broken."

"I decided a very long time ago that I don’t want children. I never looked back, and I don’t make excuses or apologize for it."

Mira: “Being myself, because in that journey I’ve had to break a lot of rules. If you don’t fit into the dominant narrative of a culture, you’re just an outsider. I’m a Muslim woman, I’m an Egyptian ... I’m trying to be an Imam, a religious leader among Muslims, and because of who I am, that’s just breaking a lot of rules.”

Amina: "Going into tech. It’s such a social norm of growing up, especially in my generation, that we hear girls are bad at math, that girls are bad at science, and I played to that narrative a lot. In elementary school I genuinely thought I was bad at math until a teacher told me that I’m actually really good at it...and now I’m a mechanical engineer. I’m the only female engineer in my company and that’s something that I want more women to pursue. Don’t be afraid of doing things. Give everything a try and follow your passion because I found out my passion is engineering and that’s not a thing that’s often publicized to girls and young women as a viable option."

Khadijah: "I model, but I’m short. It’s a rule in modeling that you have to be super tall, 5’10 or 5’11, and that’s the beauty standard. But there’s so many girls that have the same talent and are fierce but they’re not that tall, so they don’t get those opportunities. I feel like I broke that for myself at least. Like I’m not that big, but I’m living my dream."

Mariah: "Recently, I started taking things into my own hands and not listening to what society tells women that they should be doing at this age. Society, even my mom or other people, are looking at me and telling me it’s time to settle down and time to get married and look for a husband and have children, that’s what I should be focused on. But for me, it’s really been about my career and being happy with what I’m doing."

“I work in a male-dominated industry so that’s breaking a rule. I work in music, which is very male-dominated, and yet I’ve managed to work my way slowly up the rung. I work in a small company and I’m the only female there, it’s crazy, but I still love it, and I’m still able to dominate.”

"I was glad I cut class sometimes when I was in high school!"

More like this
Romance Authors Are Mobilizing For Reproductive Rights
By Natalia Perez-Gonzalez
Megan Rapinoe's Relaxation Hack Is Super Dreamy
By Carolyn Steber
Black Women's Equal Pay Day Highlights An Upsetting Problem
By Brandi Neal
Constance Wu On Self-Doubt, Family Drama, & Her Sister's Unwavering Support
By Constance Wu
Get Even More From Bustle — Sign Up For The Newsletter