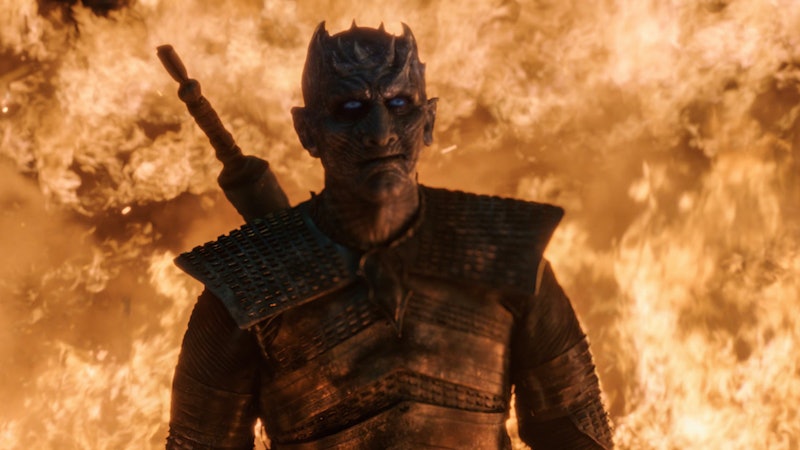 It may have seemed like Arya Stark killed the Night King during the Battle of Winterfell, but it turns out that the leader of the Army of the Dead is still very much alive — well, sort of. With the help of the Cameo app, Game of Thrones fans can receive a message from the Night King actor himself, Vladimir Furdik, though this personalized shout-out comes with a price: the price of your soul. (Just kidding, of course. He has no use for souls, only reanimated corpses.)

But in all seriousness, though, it's totally something diehard fans of the series can do to help the Night King live on after his defeat. For $100, Furdik will send out a personalized message to anyone of your choosing, whether it be yourself or a friend you think is in need of a good scare. The only thing is, it doesn't appear as though the actor would be donning his full Night King attire in these video messages, which makes sense given the CGI involved in his overall look on-screen. However, that would've been really cool to see. But getting sent something from the guy who made the Night King into the terrifying villain he ultimately became is still pretty cool as well.

Plus, now you'd be able to answer the burning question many Game of Thrones fans have wondered about for a long time: what does the Night King's voice sound like?

Then again, maybe you don't want him to actually say anything, but rather just raise his arms slowly and look into the camera like it's Jon Snow 2.0. That in itself would be super cool and creepy, especially if you sent it to an unsuspecting friend. Either way, the possibilities are endless — much like the Endless Night the Night King was striving for.

That being said, Furdik isn't the only actor from Game of Thrones available on Cameo. There's a wide selection of stars that can create a personalized video message just for you, whether it be Miltos Yerolemou, who played Arya's dance instructor Syrio Forel or Sam Coleman, who played Young Hodor. Apparently, Young Hodor will also write you a song that may or may not just be the name "Hodor" sang over and over again.

According to the FAQ page on Cameo, each actor involved with the app sets their own rate, so the cost of each person will vary. (For example, a message from Yerolemou is $50, while one from Coleman is $20.) The actors are able to change their price at any time, but don't fear — you will only be charged the price you initially booked them for.

So if you're looking for the perfect birthday gift for a friend or just want to immerse yourself further in the Game of Thrones universe, these actors are ready and willing to give you a helping hand. It may not be as exciting as visiting the set or riding one of Daenerys' dragons, but it's the next best thing.