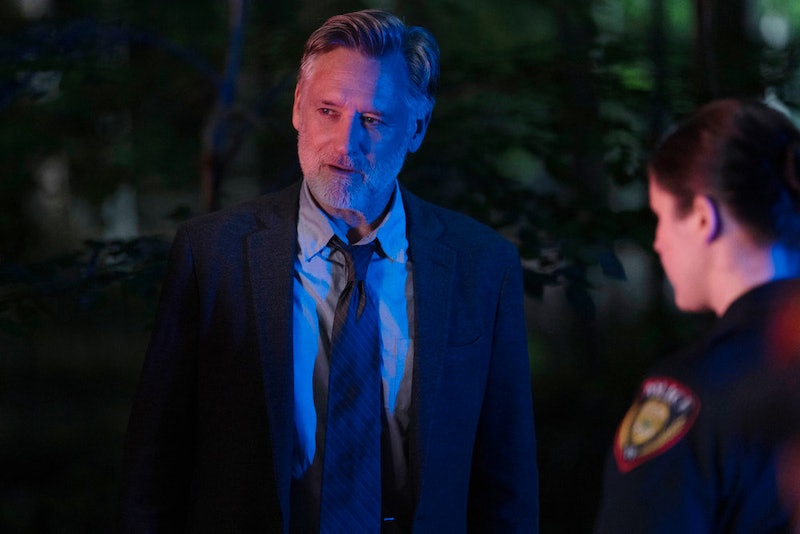 When The Sinner first premiered in 2017, the case was touted as "whydunnit" rather than a "whodunnit." That has continued to be the basis for the crimes of subsequent installments, but Bill Pullman is the real connection between The Sinner seasons. He returns as Detective Harry Ambrose in The Sinner Season 3 when it premieres on Feb. 6. This time around, Ambrose forms an unprofessional attachment to Jamie (Matt Bomer) after he and his college friend Nick (Chris Messina) are involved in a fatal car accident. Like with Jessica Biel's Cora in Season 1 and Elisha Henig's Julian in Season 2, the investigation into Jamie's motivations will uncover aspects of Ambrose's past as the detective attempts to solve the "why" of this complicated crime.

While the titular "sinner" of each season is a lead character, showrunner Derek Simonds told IndieWire following the second season that Ambrose is the true "main character" of the series. In a video for USA, Simonds explained how the perpetrators each season allow Ambrose to tap into elements of his life that he has buried. "You saw with Cora, an awakening to his own trauma and his own past, so it was a coming-to-terms with his own wounds and inner life," Simonds said. "Julian brought him back to his past and made him face his own demons and his childhood head-on." In Season 1, Ambrose pursued a sexual masochism relationship. In Season 2, he revealed he had lingering guilt for allowing his home to catch on fire as a child so that he could be released from the care of his mother who was mentally ill.

Simonds did say in the USA video that Jamie, who sees Ambrose as a kindred spirit, "really challenges" Ambrose's empathy. "Jamie is searching for that connection with someone else and he recognizes in Ambrose the same sense of isolation and loneliness that he feels himself," the showrunner said.

Pullman said in a BUILD Series interview how Ambrose tries to connect with his grandson in Season 3, but it's unclear how else his personal life will come into play during the investigation into Jamie. However, Harry's dark past may inevitably surface again. While Simonds' IndieWire interview was before the Season 3 renewal, he had said, "I have a particular thought that would bring Ambrose on the next step of his personal journey. It's a darker and scarier step." In another promo video for USA, Pullman's costar Messina seemed to confirm that this "darker" step will occur for Ambrose in Season 3. "His character faces some serious demons," Messina said. "He's up against the biggest challenge that the show has ever brought to him."

While Pullman previously told Variety that Ambrose's story might be wrapped up in three parts, now that the actor is finished with Season 3, it sounds like he'd be game to return for another chapter. "I am still a little surprised at how engaged I am," Pullman told The New York Post. "Now I feel like I'm in a long Dickens novel." So just because all of Jamie's secrets may be unveiled, it doesn't mean that the dark mysteries of Ambrose's life couldn't continue to be explored past The Sinner Season 3.