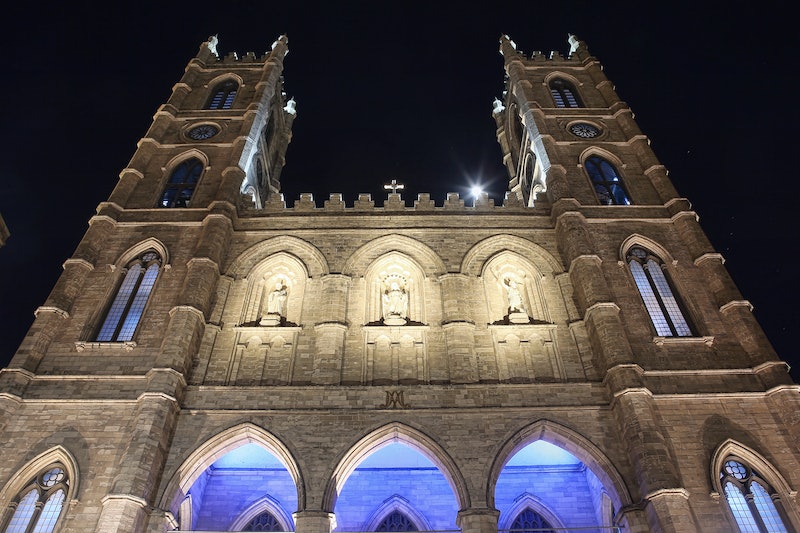 On Monday, devastating photos and videos of a fire engulfing the famous Notre Dame Cathedral floored people around the world. Hours after the news broke, according to CNN, a Paris prosecutor began an investigation into how the Notre Dame Cathedral fire started in the first place. As the fire burned through a portion of the church, a French police officer explained the horrific situation to Reuters in simple terms: "Everything is collapsing."

According to CNBC, no injuries or deaths have been reported. The media outlet also noted that local law authorities in Paris were treating the fire as an accident. The country's president, Emmanuel Macron, tweeted soon after the news of the cathedral fire broke.

Originally tweeting in French, Macron said that he was "sad tonight to see this part of us burn," according to CNN. He continued,

Notre Dame of Paris in flames. Emotion for a whole nation. Thoughts for all Catholics and for all French. Like all our countrymen, I'm sad tonight to see this part of us burn.

On social networks, various photos and videos of the burning cathedral showed massive flames engulfing the roof of Notre Dame, including this clip shared by French journalist Thomas Vampouille on Monday.

The Associated Press reported on Monday that the church's spire was undergoing renovation at the time of the fire. In 2017, Notre Dame Cathedral's spokesman, Andre Finot, told The New York Times that the church needed lots of work. At the time, the publication noted that the cathedral had "broken gargoyles and fallen balustrades [which] had been replaced by plastic pipes and wooden planks."

On Monday, associate professor of fire science at the John Jay College in New York, Glenn Corbett, told The New York Times that such architectural issues had the potential to create unpredictable problems. Corbett told the newspaper that the presence of open flames as well as other components needing renovation or fixing could lead to dangerous circumstances for the church.

"There's a history of churches and synagogues and other houses of worship falling victim to construction fires," Corbett said to The New York Times. As The Associated Press also reported, French media pointed to the local fire brigade's probe which stated that the flames were "potentially linked" to the ongoing renovation efforts.

As the photos and videos of the Notre Dame Cathedral depicted, the fire had the potential to hurt those nearby. Naturally, authorities asked visitors and locals to remain cautious and avoid the church. On Twitter, the police in Paris wrote: "Notre Dame Fire in progress. Avoid the area and facilitate the passage of emergency vehicles and intervention of the @prefpolice."

As Parisians grapple with the fire, leaders around the world have expressed sympathy and compassion. The mayor of London, Sadiq Khan, tweeted on Monday: "Heartbreaking scenes of Notre Dame cathedral in flames. London stands in sorrow with Paris today, and in friendship always."