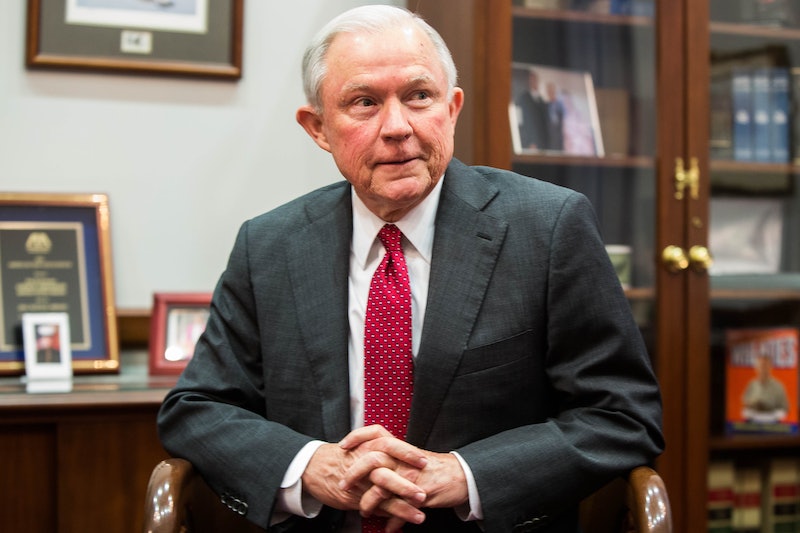 With Senate hearings for Donald Trump's Cabinet positions kicking off Tuesday, the Trump transition team is about to transition right into the actual Trump administration. At the very tip top of the problematic heap is Alabama Sen. Jeff Sessions, who is due to present himself as the potential attorney general. If you care at all about civil rights for basically any Americans, then you're probably wondering how you can protest Jeff Sessions' confirmation being tomorrow. His history on so many issues is simply far too troublesome to go through without full background checks and ethics reviews, which is exactly what Senate Republicans aim to have happen.

The Senate is where all of these confirmation hearings are taking place, so the way to try to push Sessions' hearing back is to get in touch with your senator. The New York Times reports that Democrats want to slow down the process as much as possible, and Sen. Dianne Feinstein especially is pushing to get things moved back. While your Democratic senators would probably appreciate hearing your messages of support, the senators you really need to get in touch with are the Republicans. There are enough Republicans in both his hearing committee the Senate overall that Sessions doesn't need any Democrats supporting him in order to be approved for his new post.

Start out by finding out who your senators are, and either hop on the phone or send them an email. It's probably true that one phone call won't make a difference, but if everyone does it, they might start to feel the pressure. After all, public outcry recently led the House to step back their move to strip the Office of Congressional Ethics of its power.

It's really easy to fire off a quick email or make a quick phone call, and in this case, it's well worth it. Besides Sessions' very questionable record on civil rights, he's also proven to be extremely anti-immigrant, pro-gun, and against legal protections for women, the LGBTQ community, and people with disabilities. He didn't want to reauthorize the Violence Against Women Act, and he was strongly against the Shepherd-Byrd Hate Crimes Bill, which protects the LGBTQ community. As Attorney General, he would have a considerable amount of power in determining whether laws like that would actually be enforced or fall by the wayside. This is definitely not a nominee who can afford to go un-vetted.

Senate Republicans once demanded that all Obama nominees make it through the background checks that they're now planning to bypass. It's up to all of everyone to try to make sure that this does not happen.