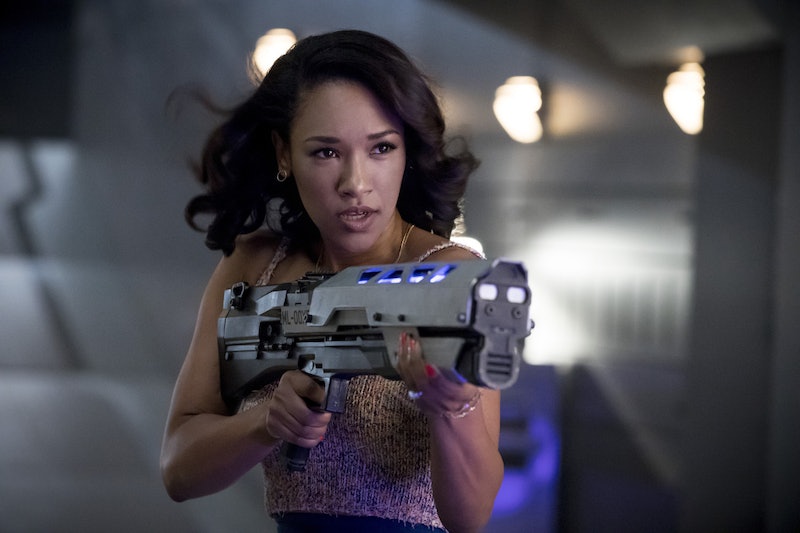 The Flash is back in Central City, but not all is as it used to be. On top of learning to navigate his new working relationship with fiancée Iris, Barry had his hands full in "Mixed Signals" dealing with brand new Metahuman threats. This week's meta was hacker Kilg%re, Ramsey Deacon, but what makes him a particularly intriguing foe isn't his murderous tendencies or meta ability to infect and control technology, it was this: he wasn't in Central City when the particle accelerator exploded, which begs the question how were the new Metahumans created on The Flash?

When Barry isn't busy trying to rebuild his relationship with Iris in "Mixed Signals" with couples therapy and awkward interactions at S.T.A.R. Labs, he is busy dealing with Central City's newest Metahuman threat: Ramsey Deacon. Ramsey's Metahuman status is obvious from his glowing purple eyes that allow him to hack into any technology in sight, but he's unlike any Meta Barry and Team Flash has ever encountered. Not only was he living in Silicon Valley at the time of the particle accelerator explosion at S.T.A.R. Labs (the one that turned Barry into the Flash), he also isn't one of Savitar's victims. Though it's possible Ramsey is a doppelgänger from another Earth who escaped to Earth-1 through one of the many breaches opened over the years, it seems unlikely.

In "Mixed Signals," Ramsey is on a mission to get revenge on his work partners who he claims stole his technology idea years ago, suggesting he's been on Earth-1 for a while. Moreover, Cisco finds proof of Ramsey's existence on Earth-1 in one of his old Tech magazines. So, if he's not a Meta made from the particle accelerator explosion and he's not from another Earth, how did he get his powers?

After Barry defeats Ramsey and locks him away in Iron Heights, he confronts him about his abilities, but Ramsey isn't talking. He does, however, admit that he "wasn't the only one" and warns, "Central City is about to have its hands full." The episode then cut to the Thinker, introduced at the end of the premiere as the real villain behind the robot Samurai, who, it was revealed, was also the mastermind behind setting Ramsey loose on Central City. "He's right where you wanted him," the Mechanic (his sidekick) says as the two look at footage of Ramsey sitting in his prison cell. The Thinker then reveals this bomb: Ramsey wasn't lying when he said he wasn't the only one. He's just the first in a series of at least 11 more Metas heading Barry's way.

It's tempting to think that The Thinker is responsible for creating these new Metas. But, he ends the episode by telling the Mechanic that their next step is to "find the others," implying that they don't already know where the other Metas are. They might know that these new Metas exist, but they don't control them yet. Though, based on Ramsey, it's obvious that even if the Thinker doesn't have control over these other Metas yet, he will soon. (To be clear, even though it doesn't appear that Ramsey was from another Earth, it's still possible that the Thinker is currently living on another Earth.)

Seeing what's coming, it's a good thing Flash has some Metahuman help from Cisco and Kid Flash in the field now. He might even get an extra hand from Gypsy, who shows up in "Mixed Signals" to share a romantic evening with Cisco (inter-Earth relationships are officially a thing, thankfully), and perhaps even Caitlin, should her inner Killer Frost come out and play again. Something tells me Barry is going to need all the help he can get.