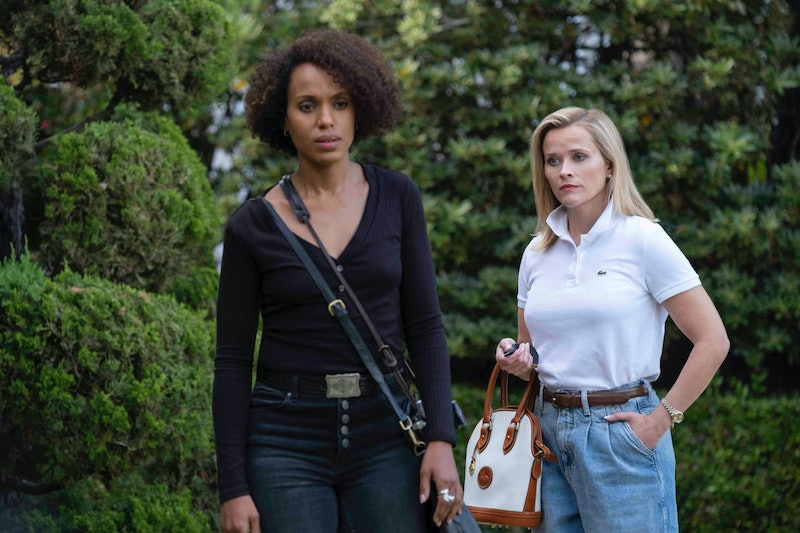 Good intentions aren't enough to keep someone from burning down Elena's (Reese Witherspoon) house with her in it during the opening moments of Hulu's new Little Fires Everywhere trailer. That explosive mystery seems to be central to the plot of the upcoming limited series, but it's just one piece of a much larger story that is set to tackle racism, motherhood, and the economic divide in Chicago's '90s-era Shaker Heights community. It's clear from the trailer that the two women at the center of this story — Elena and Mia (Kerry Washington) — are on a collision course, and it seems unlikely that things will end well for either of them.

In addition to Witherspoon and Washington, the drama also stars Joshua Jackson, Rosemarie DeWitt, Jade Pettyjohn, and Lexi Underwood. Based on Celeste Ng's 2017 novel of the same name, Little Fires Everywhere will delve into the complex relationship between Elena Richardson, with her seemingly picture perfect family, and Mia Warren, a single mother and artist who seems to be running from something in her past. Elena sees Mia as a project, and promptly rents her a house and gives her a job. But Mia defies the other woman's expectations at every turn, while also forcing Elena to realize her life isn't as perfect as she pretends it is.

"All mothers struggle, money hides it, but you can't put a price on a mother's love," Mia says in the trailer, and the scenes of Elena clashing with her daughter that follow seem to prove her point. Everyone on this show is harboring a secret that could prove to be dangerous, and that includes the kids. The big question is, which one of those secrets is enough to cause someone to commit arson?

While the show's characters are experts at hiding their truths from one another, off screen, the cast added authenticity to the story by sharing their different experiences and world views. In a new interview with Variety, Washington said, "We all took a lot of risks in revealing our inner lives to each other, our perspectives and our thoughts throughout the process. Not only did that vulnerability require opening up; it demanded a certain level of willingness from everyone involved to admit what they didn’t know.”

Ultimately, Little Fires Everywhere aims to be more than a simple mystery. These characters come from vastly different backgrounds that not only inform how they see each other, but how much they trust one another. Behind-the-scenes, Washington and Witherspoon opened up about the different ways they've experienced the world, but making that leap is going to be a lot harder for their characters, both of whom have carefully crafted personas that rely on keeping their secrets to themselves.

The first three episodes of Little Fires Everywhere will debut March 18 on Hulu.