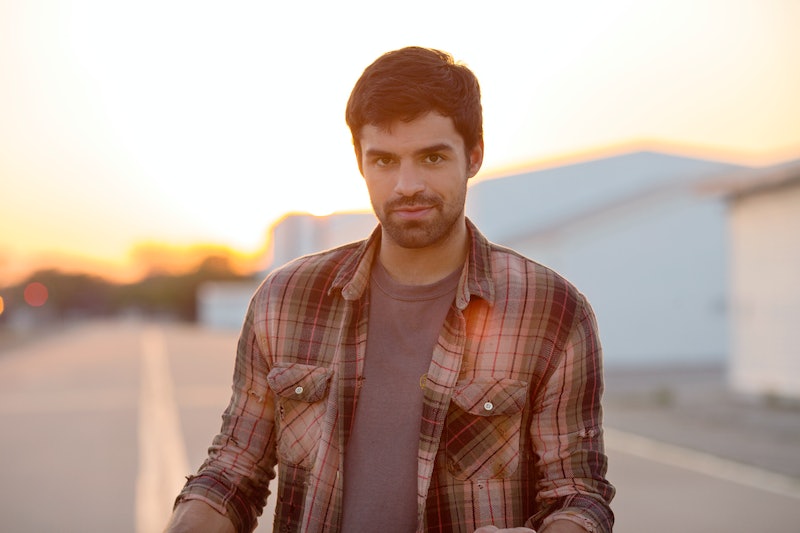 It would seem that just like our own universe, the Marvel universe is ever expanding. That latest expansion will come in the form of a new X-Men series. The Gifted, will premiere on FOX, Oct. 2. But while fans may recognize the names of quite a few character, Eclipse from The Gifted isn't in Marvel comics.

Eclipse (who will also be known by his given name, Marcos Diaz) is played by Sean Teale and is definitely a mutant. But he's also one of the original characters invented for the new show created by Matt Nix, In the Marvel universe, mutants are an evolution of humanity, who are born with an activated X-gene that gives them powers, abilities, or physical traits that are beyond what a normal human could possess.

Eclipse's powers mainly have to do with the ability to absorb and manipulate photons, turning them into beams of light or energy, or absorbing light to use as physical strength. Eclipse, along with his girlfriend Polaris and best friend Thunderbird, is on the run from the government in The Gifted. The three of them, along with others, form an underground network to help hide and protect mutants from those who would arrest or otherwise hurt them.

But Eclipse is a young guy, just learning to control his powers and often, unfortunately for him, he’s unable to do that. In a sneak preview of the new series, Teale talked a bit about his character’s power struggles. “He burns everything he touches, he never means to, but his life isolates him from close relationships with anyone," the actor said.

It isn’t just Eclipse’s powers that are out of control either. According to a Deadline article announcing Teale's casting, he's a big of a hot head. “A natural rebel compelled by circumstances to cooperate with others, Marcos [ aka Eclipse] is a passionate and strong-willed fighter who sometimes lets his emotions over rule reason," the description reads.

The most interesting thing about Eclipse, however, may be his relationship to another character on the show: Polaris. His girlfriend Polaris, unlike Eclipse, did exist in the comics before appearing on The Gifted. In fact, Nix confirmed to ComicBook.com that she’s the daughter of the X-Men’s archenemy Magneto, as she is in the books. So how is it they got together? Was Eclipse a part of the Brotherhood working with Magneto? Maybe. What we do know is that Nix has teased that Eclipse is someone with importance. In an interview with TV Insider, Nix said, “Eclipse is an original character to this show, but that doesn’t mean he’s just a random guy … Eclipse has a relationship [to someone] that we’ll explore.”

Although Eclipse is a completely new character, it does seem like he was created with inspiration in mind from another X-Men character: Rogue. Played by Anna Paquin in the live-action X-Men films (X-Men, X2,X-Men: The Last Stand, and finally X-Men: Days of Future Past), Rogue has been around in the comics since the early 1980s. In her early film depictions, she, like Eclipse, struggled with her powers, which put people in danger. Tom Bacon wrote about the link between Rogue and Eclipse’s powers for MoviePilot. He said:

“It's a trope that the comics have used to superb effect on so many occasions, most notably with Rogue, whose power allows her to absorb the abilities, memories, and even consciousness of anyone she touches. Conceptually, Eclipse seems to be similar to Rogue; unable to touch others because of powers that make him a danger to everyone around him.”

Something else to consider is the romantic relationship Rogue ended up having with Magneto. While that’s not something that’s ever made its way into the live-action films, it’s something that’s happened rather hot and heavy in the comics. Magneto had the ability to counter Rogue’s powers, allowing her to touch him without draining his powers or injuring him, before she could fully control her powers.

And who knows? Maybe this thread is unraveling. Entertainment Tonight spoke with Stephen Moyer (who will star as Reed Strucker on The Gifted and is also married, incidentally, to Paquin) and asked if there was any chance Paquin’s Rogue could make a cameo on The Gifted. His response was non-committal. “Her character, obviously, could possibly... I don’t know, I don’t quite understand the timeline because obviously, the X-Men timeline is very, very specific, son ever say never, but I don’t know," Moyer said. "I don’t want to say anything that gets me into trouble.”

So, could it be that Polaris’ magnetic powers will help Eclipse control his? Could Rogue make a cameo paired off with Magneto? With the dynamic between Eclipse and Polaris clearly mirroring Magneto and Rogue from the comics, it would also make complete narrative sense to have Eclipse’s relationship lead him to (or back to) the X-Men big bad. Perhaps the series or season arc has to do with Eclipse going against Magneto and choosing to use his powers to help humanity even though they persecute him. It's too early to say, but this original character already has a lot to deal with by the time The Gifted debuts.