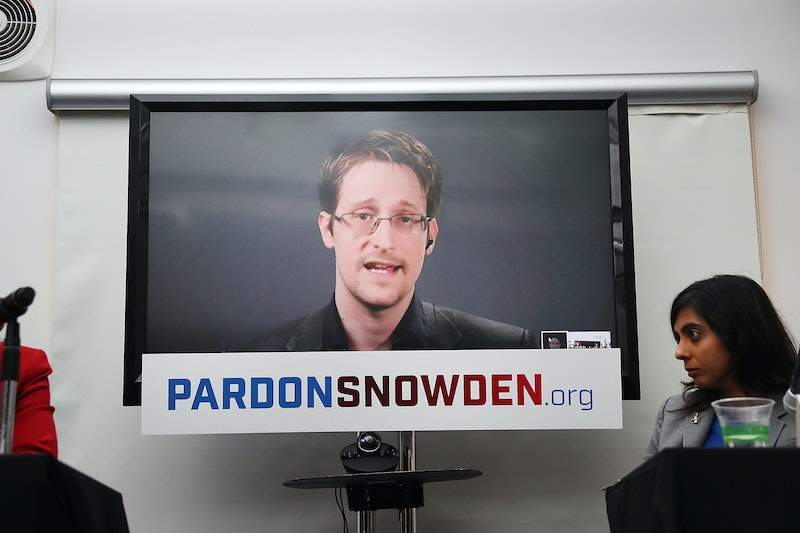 Since he fled prosecution for stealing national secrets, Edward Snowden has mostly showed up on a computer monitor, TV or screen projector. Public appearances are not unheard of — it's just his picture is being piped in from rather far away. But where exactly? Is Edward Snowden still in Russia? Yes, he is. Even when meeting with American activists regarding a possible pardon, he is doing so from his new home in Moscow.

Yes, that's right. Snowden has been in the news in recent days for his push to receive a pardon or clemency from President Obama before leaving office. His supporters have been hoping for such a solution for months. They even have organized a website PardonSnowden.org, but there's not much time left. There's even a countdown of the time that Obama has left in office on the main page.

Snowden ended up in Russia after he took NSA secrets that showed all sorts of things including the fact that the security agency was using bulk phone records of Americans. He at one point was stranded in the Moscow airport for weeks. Russia gave him a three-year residency permit in August of 2014. At the time, cooling relations between the United States and Russia all but ensured that Snowden would be shielded as a way to anger Washington.

But with Trump's election that could change — and it's something that Snowden is considering. President-elect Donald Trump and the Russian leader Vladimir Putin Speaking in a web chat with SmartPage, Snowden said that he hasn't dismissed the possibility but that he isn't afraid for his safety:

If I was worried about safety, if the security and the future of myself was all that I cared about, I would still be in Hawaii. I think I did the right thing. While I can’t predict what the future looks like, I don’t know what’s going to happen tomorrow, I can be comfortable with the way I’ve lived to today.

Some think that he is in Russia due to connections to intelligence officials there. A congressional report released in December claimed that Snowden "has had and continues to have contact” with Russian intelligence. But the veracity of the report has been challenged by Snowden's lawyer and others for being biased.

Snowden's counter argument to the Russia ties is that he has been critical of Putin. And he's not worried about angering Trump. He has suggested on Twitter that the Obama administration declassify the evidence on Russia's election hacking because that's something that Trump couldn't roll back.

Trump has been very anti-Snowden in the past. In 2014 he suggested on (of course) Twittter that Snowden be executed like in the "old days." Trump's pick to head the CIA feels similarly and has made the execution argument too.

Russia may not be perfect, but you can see why Snowden might consider staying with the political winds headed in that direction. His only other solution lies in Obama pardoning him before leaving the White House.