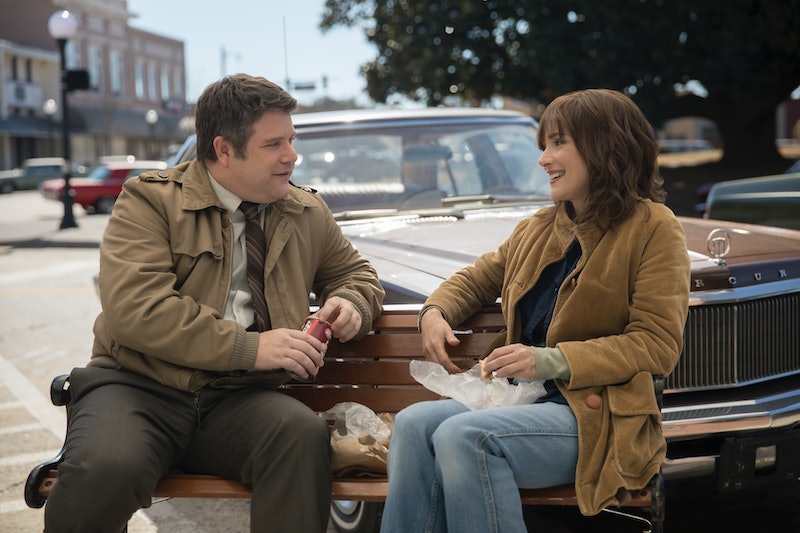 The town of Hawkins, Indiana may seem to be full of kind '80s suburbanites, but Stranger Things fans know that evil is lurking. The new season of the Netflix series includes a host of new characters who will prove to be either friend or foe to our heroes in their next adventure. Is Joyce's boyfriend Bob good in Stranger Things 2? It's hard not to trust Sean Astin, but maybe we should be a little wary of this new character.

According to Vulture, Bob Newby is the manager at the Radio Shack in Hawkins, and Joyce isn't ready at first to get into what happened when Will was taken to the Upside Down. They're already together by the time the season begins. According to executive producer Shawn Levy in an interview with Screenrant, Bob is "the new Barb" this season, which points to him being a sympathetic character. The magic of Barb can never be repeated, but maybe that just means Bob is more boring than conniving.

In theory, this should be a good development. Joyce is moving on. She's opening up to other people, and not just talking to twinkle lights. The thing is that Bob is... so... nice. To paraphrase a lyric from the musical Into The Woods: he's not good, he's not bad, he's just nice. Maybe too much so. Not to say that you shouldn't trust nice men specifically, but in the world of Stranger Things everyone's motives should be questioned.

It's also a pretty big red flag that we, as an audience, don't know how Joyce and Bob met and started up this relationship. Sure, they knew each other in high school, but why reach out now? What happened between Season 1 and Season 2? Just saying, if Bob was considered a nerd in school, he might be out seeking revenge.

Yes, it's sad that we initially doubt that someone being nice to Joyce, Jonathan, and Will has a nefarious plan. They deserve to have nice things, especially after all the trauma they've been through. Unfortunately, the Byers family is wrapped up in a conspiracy that isn't going anywhere. They're targets now. Wouldn't you be suspicious of someone who who wanted to date you, and then got super involved in the lives of your son and his friends — particularly when those meddling kids have already proven themselves adept at uncovering the town's darkest secrets?

The fact that Bob manages a Radio Shack might actually be a big clue. If Hawkins Power and Light is the source of evil in the small town, wouldn't it make sense for them to have their hands in an electronic store? Or, perhaps Bob took that job so as to appeal to the AV club (and Will and his friends by extension)?

For a show that deals so heavily in tropes and homages, the archetypal concept of a nice guy who appears out of nowhere should be considered as well. Sean Astin is, of course, a walking pop culture reference thanks to The Goonies and later Lord of the Rings. But what about the character? Bob could be the harmless addition to the sequel like Carol Marcus in Star Trek II: Wrath of Khan, or the secretly evil Carter Burke from Aliens? Burke, incidentally, is played by Paul Reiser, another actor who joined Stranger Things in Season 2.

Maybe Bob Newby's kindness is a red herring. The LA Times review notes that Bob loves Kenny Rogers, which means he can't be too bad. That said, for now he just seems way too good to be true. Whether or not Bob is connected to the Upside Down is remains to be seen, but unfortunately for Joyce it would be wise if Stranger Things fans kept their eye on her new beau just in case.