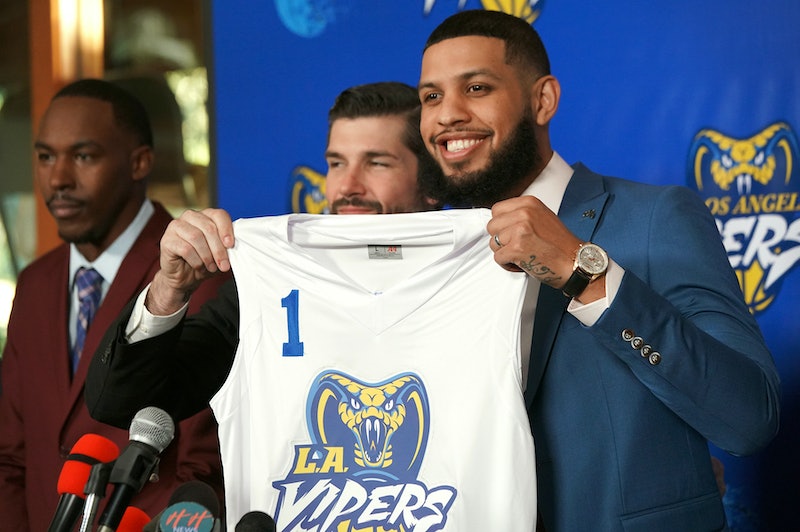 BET's Games People Play is (kind of) a classic tale of high school romance gone wrong. The sexy, basketball-fueled drama follows Vanessa (Lauren London) and Marques King (Sarunas Jackson), high school sweethearts whose marriage is imploding. Marques is a basketball star with a fidelity problem, and Vanessa a devoted wife and mother struggling to keep it together. The story may sound familiar — and has certainly struck a chord with Games People Play viewers — but Marques King is ultimately based on a character from a novel, not a real person.

The scripted BET series is based on Angela Burt-Murray's Games Divas Play (tagline: "all's fair in love, basketball, and murder"). Just like in the show, Marques is a basketball star married to high school girlfriend Vanessa, and also a serial cheater. It's unclear how closely the television series will mirror the plot of the novel, but the core premise — basketball "royalty" struggling with public perception and private turmoil — remains the same.

Notably, Games People Play producer Tracey Edmonds has worked with Burt-Murray before, adapting her 2005 novel The Vow into a Lifetime TV movie. Per Edmonds, it's precisely because of the characters Burt-Murray develops that she's eager to adapt her work to the screen. She was hooked not only by the "drama" and "secrets" fueling the plot of Games Divas Play, but by the people behind it. Edmonds' immediate reaction to reading the novel was "we should really explore [these characters] more on the TV screen."

When it came to the character of Marques King, it was especially important for Edmonds that they get it right — and to her, that meant finding "a baller who could act and an actor who could ball." Luckily, Sarunas Jackson is no stranger to the court, with a background playing on an AAU team, in college, and professionally in Tokyo, Taipei, and Taiwan. (You may know Jackson as Dro from Insecure, by the way — if you don't, go watch Insecure.)

For Edmonds, Jackson's background was key to making Marques' character true to life, and doing justice to the real-life stories to which the plot of Games People Play refers. Jackson's ability to "tap into real life experiences" while playing Marques — not to mention the "arsenal of friends who are still playing pro ball" he has at his disposal — adds a layer of authenticity when watching Marques on screen, both on and off the court.

While the character of Marques King is not based on any one NBA player, the story of his relationship has played out many times before — and women are having no trouble relating to the plight of his wife.

Speaking to TheGrio about Vanessa King, Lauren London describes her as a "a broken wife and a woman." Unlike her previous "surface roles," London felt that Vanessa presented an opportunity to dig deep: "I’m 34, I have kids and I have lived some life that I can put into this," she concludes.

BET's Games People Play is more than an inside look at the glamorous lives of pro athletes and their families (though it is that, too). It's a carefully constructed look at a waning relationship between two people with a lot to lose, and a frank examination of what drives people's choices when it comes to sex and love. It's also a reminder that fiction doesn't have to name names in order to represent real life — in this case especially, it may have been more valuable not to.

More like this
Twitter Is Freaking Out Over Rihanna’s 2023 Super Bowl Halftime Show Announcement
By Stephanie Topacio Long
How Much Are The 'Schitt’s Creek' Stars Worth?
By Hugh McIntyre
The ‘Kevin Can F**k Himself’ Season 2 Finale Twist Is A Full Circle Moment
By Grace Wehniainen
These Memes & Tweets About Alicent in 'House Of The Dragon' Prove She's The Queen Of Messiness
By Grace Wehniainen
Get Even More From Bustle — Sign Up For The Newsletter