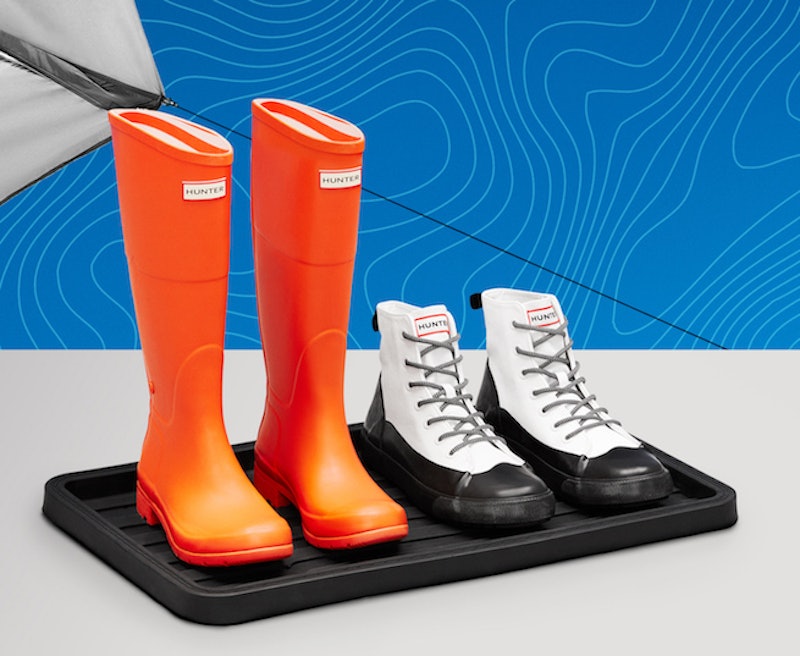 Target's much anticipated collaboration with Hunter hit stores and online this past Saturday, April 16, and as anticipated the Target x Hunter line began selling out fast. Designer collaborations don't have a tendency to stick around long on shelves, especially when fashion lovers are already mobbing the front doors before the store even opens. Hunter has been a fan-favorite for a long time now, where its rainy day clothes and outdoor apparel has been a staple among both the stylish and practical alike. But seeing how its iconic rain wellies usually retail for around $150, and they almost never have sales, it's no surprise that people had set their alarm clocks for Saturday morning to snag a more affordable pair.

But the collab offered so much more than just stylish boots. It was a 300-piece collection which included menswear, kids's clothes, outdoor gear, rain jackets, shoes, and accessories. There was a lot to pick and choose from, but you had to do it at a break-neck pace if you wanted to actually buy something before it all sold out. While a lot of pieces are indeed sold out online and in-stores, there are still some items up for grabs, so you haven't completely missed out on the line drop.

A Target rep told Bustle jackets and bags have been among the most popular pieces, so it might be difficult to track down one of those items, but there is still some children's clothes, dresses, and women's apparel available.

You just have to have the patience to click on the items and check. While many people were bummed when they showed up to the store or hopped online only to find a lot of the stock already gone, the big box store said that that was just the way designer collaborations work. "That's the nature of our designer collaboration — they are available for a limited time only and in limited quantities. We don't restock the collection," a Target spokesperson told Business Insider.

However, some shoppers were frustrating with Target's announcement on April 13 that its tall women's rain boots wouldn't be available on April 14 because of a recall. Seeing how many people were counting to storm the store for just that one item, it caused a lot of disappointment.

"For guests eyeing the women’s tall rain boots, unfortunately they are delayed and won’t be available in stores or online when the collection launches. We apologize for any disappointment and we’ll share more information when we can," Target released in a statement.

Hunter also took to Twitter to explain that the Hunter boots you will buy at Target won't be the same quality you would get in its own original collections. "Target won’t sell Hunter Original boots. Our boots are handcrafted from natural rubber following an intricate process. The ones designed in partnership with Target are not produced the same traditional way. We hope that helps," the brand explained.

It also appears that the boots weren't the only thing delayed, where other items were also not in stock and no where to be found during the release date.

Others went to multiple Target locations only to find that no Hunter pieces were available yet, which caused a lot of confusion. "Why not just delay the launch until everything was available for sale online and in stores?" one shopper asked on Twitter.

While there seemed to be a haze of confusion over the launch date, that didn't stop the collection from selling quickly. While there is still no new information on the women's rain boots, you can still snag some of the pieces from the massive collection while you wait for the boots impending release.