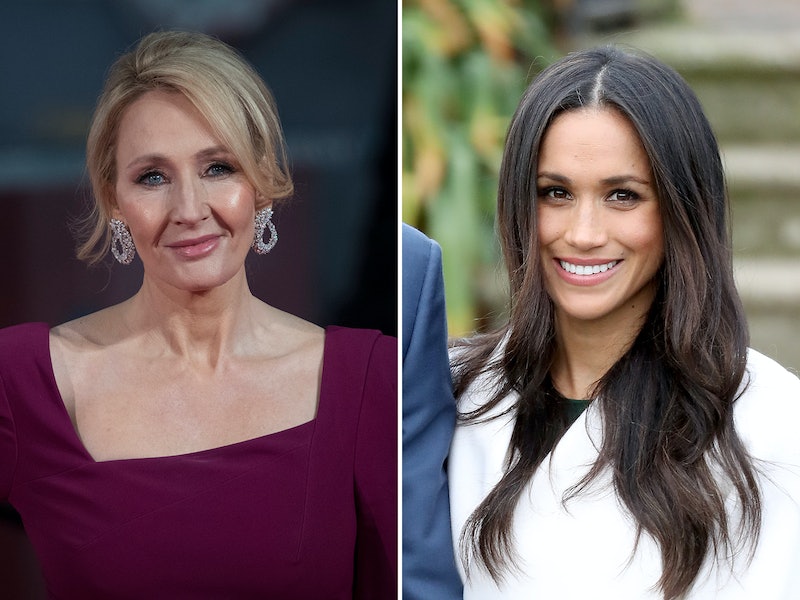 The Internet broke on Monday morning, when Prince Harry and Suits actress Meghan Markle announced their engagement. Quick to rain on the couple's parade, people came out of the woodwork to criticize the Prince of Wales' choice in a mate, prompting the magical J.K. Rowling to voice her support for Meghan Markle in the best way possible.

Prince Harry and Meghan Markle's relationship has been the subject of controversy since they began dating publicly in June 2016. Markle's mother is black, and her father is white, and some very vocal bigots use her racial background as an excuse to torment Markle and her fiancé. Just over one year ago, on Nov. 8, 2016, Buckingham Palace released "A Statement by the Communications Secretary to Prince Harry," which condemned "the smear on the front page of a national newspaper; the racial undertones of comment pieces; and the outright sexism and racism of social media trolls and web article comments." That's right: the public's treatment of Markle was so bad that her boyfriend was forced to issue an official statement.

This new wave of criticism aimed at Markle clearly has its roots in racist double-standards, but is verbally concerned with the details of the actress' past: namely, her divorce from Trevor Engelson in 2013. Writing for The Spectator, Melanie McDonagh asserted that Markle was "unsuitable as Prince Harry's wife for the same reason that Wallis Simpson was unsuitable: she’s divorced and Harry’s grandmother is supreme governor of the [Church of England]."

Although this argument will likely become the toe-hold of choice for English racists, reasonable folks were quick to point out that plenty of modern royals have been divorced, including Prince Charles and Camilla, Duchess of Cornwall. Also on these pro-Markle Twitter-users' minds: the fact that the Church of England was founded, primarily, to facilitate a divorce between King Henry VIII and Catherine of Aragon.

Seeing her chance to speak out in support of Markle, Rowling posted a simple tweet: "TeamDivorcée." As of this writing, it has been re-tweeted more than 1,000 times and liked nearly 10,000 times. Additionally, more than 800 people have used #TeamDivorcée to talk about the double standards to which our society holds women. If being divorced does not invalidate Prince Charles' claim to the throne, why should it prevent Meghan Markle from marrying her prince?

As a woman, I'm offended that a man's divorce will treated differently than mine in the court of public opinion. As a person who believes in racial justice, I'm angered by the fact that Meghan Markle has been targeted by a bunch of racists, just because she's dating — and now, marrying — an English royal. And as an unashamed member of #TeamDivorcée, I'm really ticked off that we're having this conversation in 2017.

For the record, this is pretty much the only acceptable response to the news of Meghan Markle's engagement:

Now, if you'll excuse me, I'm off to start planning a Royal Wedding Viewing Party.