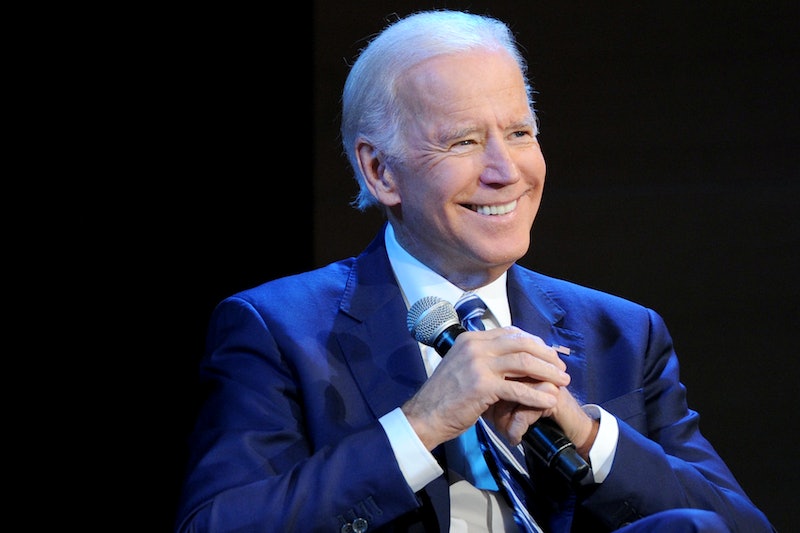 The 2018 midterm elections are still two months away, but speculation about which Democrats will run for president in 2020 is already in full swing. A lot of this speculation is focused on one man: former vice president Joe Biden, who hasn't yet confirmed whether or not he'll run for the nation's highest office. When Twitter saw Joe Biden literally running in Pittsburgh's Labor Day parade, though, pretty much everyone took that opportunity to make a presidential pun.

"Joe Biden. He’s...running," wrote CNN political reporter Rebecca Berg on Monday, along with a video of Biden caught in the act. She was hardly the only one to make a version of that exact same joke. Politico Chief Washington Correspondent Edward-Isaac Dovere, among others, also joined in on the fun, posting a video from a different angle along with the caption "Joe Biden in Pittsburgh, running."

Joe Biden hasn't decided whether to run for president, but according to the Independent, he set himself a deadline for that decision. While speaking in Colombia, he said that he would decide by January 2019 — well after the midterms have been decided. While he said during that same speech that his current polling would have him beating President Donald Trump, Trump doesn't seem to agree.

"I dream, I dream about Biden. That's a dream," Trump said during an interview on CBS News. "Look, Joe Biden ran three times. He never got more than 1 percent and President Obama took him out of the garbage heap, and everybody was shocked that he did. I'd love to have it be Biden."

While polls on the 2020 election won't necessarily remain true once the election begins in earnest, one poll from Politico shows that the president may be engaging in a bit of wishful thinking. According to that poll, which was taken in mid-August, Trump is behind Biden by 12 points. He's got over two months to make up that difference — that is, if Biden does decide to run and does beat out the primary competition — but there's no denying Biden's popularity.

Biden decided in 2015 not to run, saying that it was too soon after the death of his beloved son Beau, as the New York Times reported in October 2015. This had many people — including Biden himself — later wondering if his chances would have been better than Hillary Clinton's in the general election against Trump. Biden, for one, thought that he might not have shared Clinton's fate.

“I had planned on running for president. And although it would have been a very difficult primary, I think I could have won,” Biden said in an appearance at Colgate University, according to the Guardian. “At the end of the day, I just couldn’t do it. So I don’t regret not running. Do I regret not being president? Yes.”

For those who do want to read something into Biden's display of fitness in Pittsburgh at the parade, several Twitter users pointed out that because Biden is over 70, convincing voters of his physical strength could be a significant part of his campaign. And against Trump — who famously took a golf cart at a G7 meeting in Sicily rather than walking 700 meters with the other world leaders — Biden's physical fitness could actually be important for some voters.

So, Biden's decision is still up in the air. But for one day in Pittsburgh, he allowed Twitter to believe.