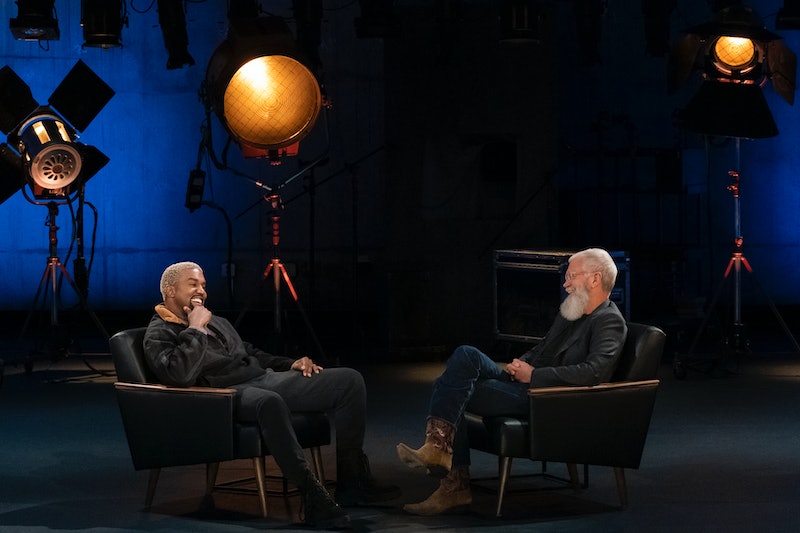 It was inevitable that when Kanye West sat down with David Letterman, there would be some interesting moments. The rapper has always been notorious for his controversial opinions, and his polarizing statements have only become more prevalent in recent years. Near the end of the legendary talk show host's Season 2 premiere of My Next Guest Needs No Introduction, Kanye West discussed the #MeToo movement with David Letterman, and they definitely weren't on the same page.

In a conversation about the idea of fear, West brought up "the fear" he feels powerful men have been faced with since the #MeToo movement began. He condemned the idea that these men are supposedly wondering, "What did I do over the past 30 years of my life?" in order to determine if they've behaved inappropriately.

Always a pro, Letterman was respectful to his guest, but also made his opposing point clear. "Well, you mention a general fear of the male side of this situation," he responds. "I would submit that it's not equal by any equation to the fear women feel being the other side of that." Letterman's statement, unlike West's, was met with cheers and shouts from the audience.

The conversation didn't end there. "I'm definitely supportive of the women," West clarified. "What I'm saying is we're not allowed to have any conversation. When you go to court, both sides can talk. This is a court of public opinion. [There's an idea] that when someone bombs first, the war is supposedly over."

West's opinion isn't a new one. The worry that men now have to frantically examine every interaction they've had with women over the course of their lives is one that plenty of #MeToo skeptics have invoked. But though people like West frame this development as a bad thing, men in power should be examining their behavior. Even men who aren't predators or overt sexists can fall into habits fostered by an inherently patriarchal society, and self-reflection is absolutely necessary. And though he condemns "the court of public opinion," there are plenty of real-life courts involved too. Harvey Weinstein faces a criminal case, as does Kevin Spacey for his alleged actions.

The idea that well-meaning men will now arbitrarily face a #MeToo backlash isn't just a fundamental misunderstanding of the movement's goals, but it's also outright harmful to women's careers.

A study by LeanIn.org and SurveyMonkey reports that 60 percent of male managers are uncomfortable interacting with women in the workplace, which is a 32 percent increase from last year, according to People magazine. There's no doubt that those attitudes could hurt women's chances of being included in the same meetings and activities as their male counterparts, and ultimately, of experiencing the same upward movement within the company.

And after generations of women who have traditionally felt stifled, uncomfortable, and fearful in the workplace, it's shameful for people to only consider it a problem now that men might feel a bit of the same.

West is correct in one of his insistences: that we need to learn to better speak about these topics. More conversations need to be had, as he said. But they'll need to come after plenty of that self-reflection he seemed to find unfair, and as Letterman points out, women typically will have far more to fear than men when these topics arise.

"With future reinforcement and enlightenment, there may be a more reasonable expression of friendliness between the sexes that isn't threatening to women," Letterman told West. "What we realize is that these changes are pitifully slow."

The entire interview with West and Letterman is worth a watch — this is not the only topic on which they clash. But Letterman's impeccable interviewing skills keep things rolling, and West's statements, no matter how inflammatory, at least give us something to talk about.