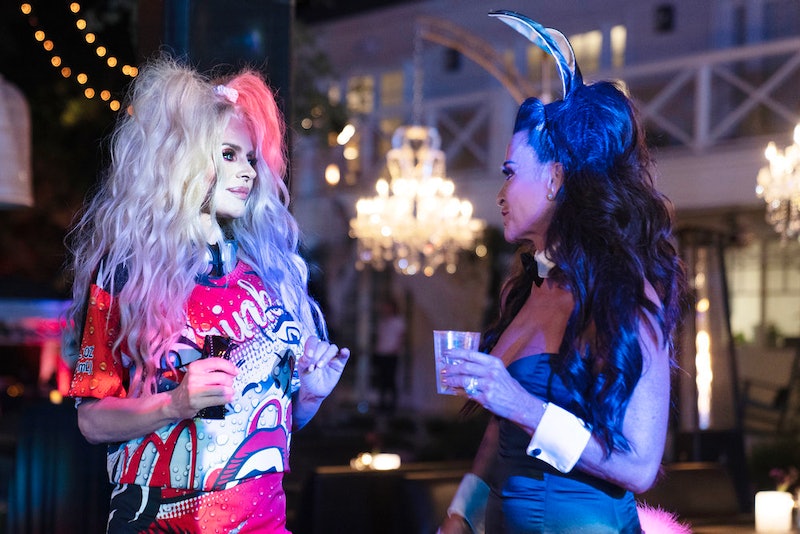 It actually happened. Four seasons later, Real Housewives of Beverly Hills cast members Kim Richards and Lisa Rinna finally made up, but how long will it last? These two have been going at each other since Season 5 so it's hard to imagine this being the end of their issues. But maybe time really does heal all wounds. Especially since Kim isn't even a cast member anymore.

In all honesty, Kim seems to be living her best life away from the show and truly thriving as a grandmother. Unlike many former Real Housewives, Kim doesn't seem to have any interest in the RHOBH drama at this point. She probably wouldn't have attended the filmed party if it wasn't in honor of her niece Farrah Aldjufrie's birthday.

Ironically enough, their reconciliation came on the heels of their latest argument. Lisa insisted that she was channeling Erika Jayne since she was dressed like her for Halloween, but she did something that Erika would never do: start an argument. Erika will finish any confrontation, but she would never start one, especially out of nowhere. That's more of a Rinna tactic if we're keeping it one hundred.

In character as Erika, Lisa said, "You know what, I want to say one thing. Kim, you giving Lisa Rinna that bunny was really c*nty." Yes, she nailed the lingo. Erika has been a very avid fan of the "c" word. However, that's the only Erika-esque thing that Lisa said that night.

Moving on to the issue at hand, she was referencing the legendary moment at the Season 7 reunion when Kim returned a bunny that Lisa gave her, which was intended to be a gift for Kim's grandson.

Kim gave it back after a whole season of Lisa questioning Kim's sobriety and claiming that Kim was "close to death" to then-cast member Eden Sassoon. During the May 28 episode, Denise Richards stepped in to defend Lisa and Kyle Richards stood up for Kim. Pretty much everyone in the cast got involved, except for Erika who sincerely told Kim, "I wish it was different between the two of you." Again, if Lisa truly channeled Erika Jayne this wouldn't have ever happened. However, there was some light at the end of the tunnel.

Lisa and Kim finally sat down for a one-on-one conversation. Kim asked, "Do you want to say you're sorry?" Lisa responded, "Well, you never apologized to me for that moment." They went back and forth and finally agreed that they both owe each other sincere apologies.

Lisa recalled, "I used to have a nice relationship with you. I would be happy to go back to that." The two of them actually agreed to "forgive and move on." Then they shook each other's hands and hugged.

But wait, when did they really have a "nice relationship"? At the beginning of Season 5, Lisa questioned Kim's sobriety. Then Kim antagonized Lisa about her husband during the cast trip to Amsterdam. This, of course, led to Lisa's iconic glass smash.

From that point on, it just seemed like there was no turning back. At a minimum, it was so awkward every time they were in the same room. And in their feud's worst moments, there were tears, broken glassware, and rejected gifts.

Is this really it for the two of them? Have they truly made peace? Or is the truce between them merely temporary? Only time will tell, but let's hope so. It would be very interesting to see Lisa and Kim on the same side the next time Kim appears on RHOBH.