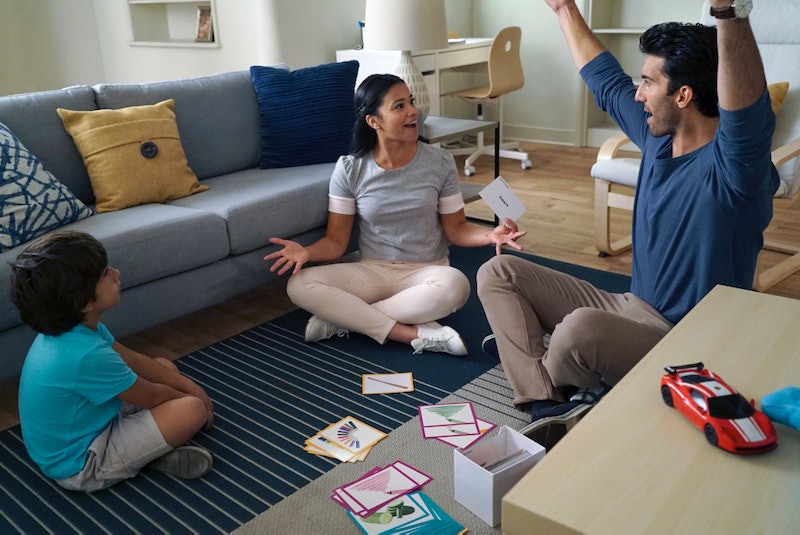 Mateo has been struggling with his reading, which is particularly painful to Jane as a writer. In "Chapter 91," his teacher suggests he gets tested for a learning disability. He is diagnosed with ADHD due to his struggles when it comes to focusing, prioritizing, and paying attention. While the narrator has been a (somewhat) trusted guide of Jane's story throughout the series, he experiences these very same struggles when it comes to narrating "Chapter 91." Jane's writing worlds and real worlds keep crashing into each other in the episode and in the very beginning, the narrator acknowledges this when he says, "Sorry, I lost focus for a second. Juggling a lot of things."

One way to explain that the narrator's lack of focus has nothing to do with Mateo's narrator status is to say that this is simply the theme of the episode. Anthony Mendez's, the actual voice of the narrator, often incorporates what's going in Jane's life into his narration. In "Chapter 91," Jane is balancing writing Rogelio's telenovela and her novel and so the narrator's storytelling reflects that with Jane, Xo, and Alba popping up in This Is Mars with Rogelio and River Fields. The narrator even connects Mateo's impaired executive functions to Jane's once she is no longer distracted by the telenovela.

Yet, there seems to be something bigger at play here that could tie into the Mateo is the narrator theory. When the doctor tells Jane and Rafael their son's diagnosis, Jane pauses and says, "Sorry, I'm just trying to imagine what it feels like for Mateo." The narrator then jumps in and says, "You know what? Let me show you what it feels like." He then flashes to Rogelio making his Dina apology "super-sized cupcake" cake, Jane trying on Petra's engagement ring for JR (poor Petra), Alba and Jorge on their honeymoon, and a ladybug. The narrator is actually able to give a glimpse into Mateo's mindset (plus, show all that hard work he puts into navigating this twisty story). But what's particularly interesting about this is that the narrator does this at the suggestion of Jane — which could mean that the narrator is a version of Mateo that Jane has written into her own story.

Slate brought up the theory that Jane is narrating her own story through her novel. But what if Jane frames her novel around her son narrating his mother's story? That would make the narrator not truly Mateo, but his mother's interpretation of him. This could help explain why the narrator has a Spanish accent while Mateo is already speaking with an American accent. And Jane trying to see life through Mateo's eyes in "Chapter 91" just may be the ultimate clue that this theory is legitimate.

After Season 4, Reddit user ColletteO outlined some reasons that Mateo seems like the most valid candidate for narrator that might help push you even further into believing this theory. Then there's the fact that showrunner Jennie Snyder Urman said the narrator's identity will be revealed in the last few moments of the series. With only nine episodes to go before the end, the focus on Mateo's diagnosis, the narrator showing signs of distraction, and Jane writing her novel, "Chapter 91" could be the ultimate proof that Mateo is the narrator. Because even if it's not exactly the little boy we've watched grow up, it could very well be his mom's fictionalized version of him.