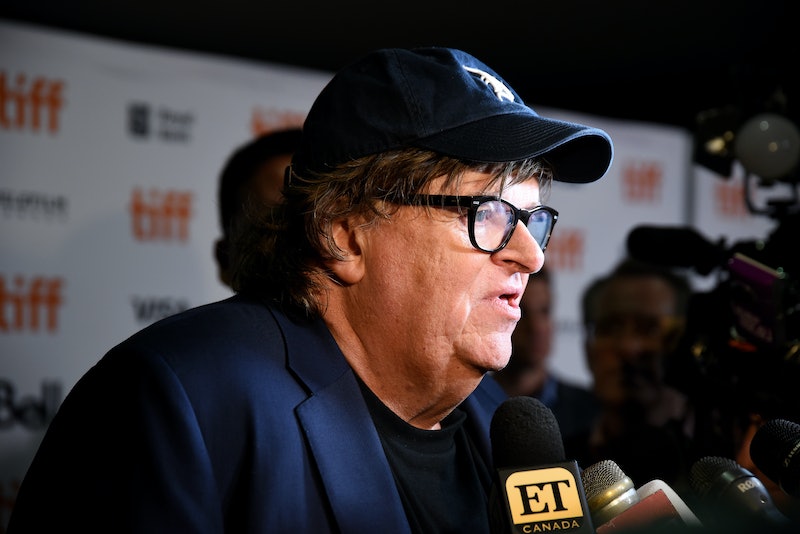 Over the weekend, yet another voice chimed in about an anonymous anti-Trump article that has rocked American politics. Michael Moore's response to the New York Times op-ed, which claims there's a secret "resistance" operating behind the scenes among Trump's staff, revealed who he thinks is behind the piece. And the film director pointed straight to the top of command at the White House.

"Trump wrote it," Moore told CNN in an interview published Sunday. "Trump or one of his minions wrote it." Bustle has reached out to the White House for comment about Moore's theory.

Press Secretary Sarah Sanders has described the unknown author as "gutless." "It’s frankly sad and pathetic that a gutless, anonymous source could receive so much attention from the media," she said after the piece's publication, according to The Hill.

President Trump has made similar statements about the op-ed and its author. "If the failing New York Times has an anonymous editorial — can you believe it, anonymous — a gutless editorial — we are doing a great job," he said while speaking to reporters at the White House, per USA Today.

For his part, Moore said he believed that if Trump wasn't behind the op-ed directly, then he thinks that the president instructed a White House staffer to write it. "He's the master distractor," Moore told CNN. "He's the king of the misdirect. If we have learned anything by now, it's that he does things to get people to turn away."

To back up his argument, Moore pointed to the contents of the op-ed, itself.

"Let me give you the line in there that is most identifiable that he wants the public to believe," he said. "It's the line that says, 'Don't worry, adults are in the room.' That's the idea, to get us to calm down and look away from what he's really doing."

The portion of the op-ed that Moore pointed to suggests that the author and his or her compatriots have a clear understanding of what is at stake for the United States in the current political moment. "It may be cold comfort in this chaotic era, but Americans should know that there are adults in the room," the anonymous author wrote. "We fully recognize what is happening. And we are trying to do what’s right even when Donald Trump won’t."

In a note published at the top of the op-ed, those in charge at the Times wrote that the piece was being published anonymously "at the request of the author, a senior official in the Trump administration whose identity is known to us and whose job would be jeopardized by its disclosure." The note, along with the piece itself, has been the subject of intense controversy.

Some critics have even argued that writing the piece amounted to treason; others have taken issue with silently resisting an administration which is generally quite outspoken. Still, the author's identity has remained a mystery. And as for Moore's theory, the truth may well never be revealed.

More like this
The Most Anticipated Books Of October 2022
By K.W. Colyard
10 New Must-Read Books Out This Week
By K.W. Colyard
'The Walk-In' Revisits A Terrifying Real-Life Murder Plot
By Sophie McEvoy
'MAFS UK' Changed The Rules After Matt & Whitney Cheated On Their Partners
By Catharina Cheung
Get Even More From Bustle — Sign Up For The Newsletter