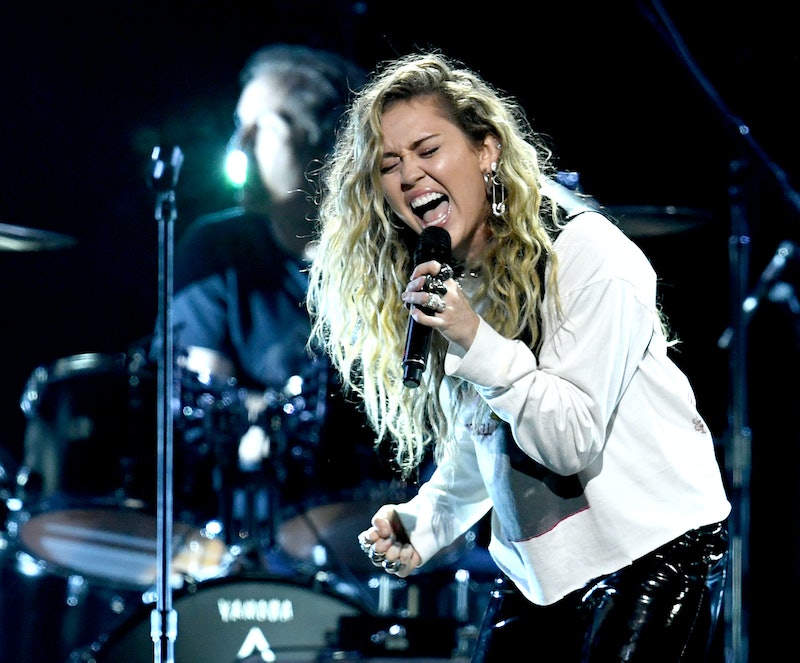 Apparently, just being Miley involves opting out of the traditional album release schedule and just doing your own thing. On Friday, Miley Cyrus released She Is Coming as part one of her new album, with two more installments set to drop before the end of the year. According to Rolling Stone, all three EPs will feature six tracks, with each installment representing "a different chapter to a trilogy," Cyrus' rep told the outlet.

Cyrus herself announced her plans for the extended project via Twitter on May 31, after celebrating the release of She Is Coming. "This is the 1st of 3 drops!" the singer explained. "6 songs , 3 EP’s ! SHE IS COMING / HERE / EVERYTHING all to make up 1 album #SHEISMILEYCYRUS next 2 drops to be announced !" While she didn't reveal exact plans for when fans can expect the next two installments of the album, Rolling Stone noted that part two, She Is Here, is currently slated for a spring or summer release, while She Is Everything will likely arrive in the fall or winter.

Ahead of the release of She Is Coming on Friday, Cyrus' new music made headlines when she performed three songs from the new EP at BBC Radio 1’s Big Weekend in the U.K. the week before its release. While performing her song, "Cattitude," which includes the line, "I love you Nicki, but I listen to Cardi," several outlets posited that the track was an attack on some of Cyrus' fellow female musicians, which she quickly refuted soon after.

"I think that you’re allowed to enjoy two artists that feel in a similar lane. I grew up collaborating with Demi and Selena. There was never any competition," Cyrus explained on the Capital FM Breakfast Show. "Ariana [Grande] is one of my best friends. When you are authentically yourself, no one can be you, so you’re never worried about someone stealing your place because it can't be taken."

She continued, "I think that what they do is so different from each other — that's why they both get a crown. They don't have to share, they don't have to break it in half. There's no reason to fight over it. They're both queens."

In addition to RuPaul — who appears on "Cattitude" — She Is Coming features appearances from several big names in hip hop, including former Wu-Tang member Ghostface Killah, Swae Lee and the producer Mike WiLL Made-It, who collaborated with Cyrus on the Bangerz-era song, "23." Despite the EP's hip hop leanings, however, the singer told Vanity Fair February that the full album, She Is: Miley Cyrus, will be "genre-less."

"There’s psychedelic elements, there’s pop elements, there’s more hip-hop-leaning records," she told the magazine. "You know, in the same way I like to kind of just be genderless, I like feeling genre-less." In a "memo to the world" that Cyrus shared with VF as part of their cover story, she explained that she wants her music to represent all sides of her, and her ever-changing tastes and inspirations. "I try to be true to myself in every state of being. ... My creative process comes from feeling inspired by life experiences, not pressured by industry standards," she wrote.

The memo continues, "When people hear my music they hear a fragment of time, something I feel or felt right then. By the time it gets to your ears I may have grown past it, but I am truest to who I am at that very second. That can be five thousand different colors and shades at the same time. I’m a creative vessel that thrives on change and evolution, I love to feel, and to feel extremes."

In the interview, Cyrus also talked about how losing the Malibu home she shared with now-husband Liam Hemsworth "changed my f*cking life," and inspired them to take the next step and get married. It seems that influence is present on She Is Coming, which features the romantic song "The Most," which fans think is about her relationship with Hemsworth. The track's pop-influenced sound is a contrast to some of the EP's more rap-inflected songs, which is likely a foreshadowing of the way that She Is: Miley Cyrus will incorporate all of the genres and sounds that have influenced the singer over the course of her career.

While there is still plenty more to discover about this new era of Cyrus' career, it's clear that her genre-bending, headline-grabbing new music will come together to give fans the clearest view they've had yet about who Cyrus is and what inspires her. Clearly, there's a lot more to come from this singer for the rest of 2019.

More like this
How Ghosts Inspired Kesha's New Music
By Jake Viswanath
Beyoncé’s Special Tribute To Sister Solange Was Both Touching & Hilarious
By Stephanie Topacio Long
Is Dua Lipa Dating Trevor Noah? New Photos Show Them Kissing & Hugging
By Brian Anthony Hernandez and Martha Sorren
Everything To Know About Taylor Swift’s 10th Studio Album, 'Midnights'
By Grace Wehniainen and Jake Viswanath
Get Even More From Bustle — Sign Up For The Newsletter