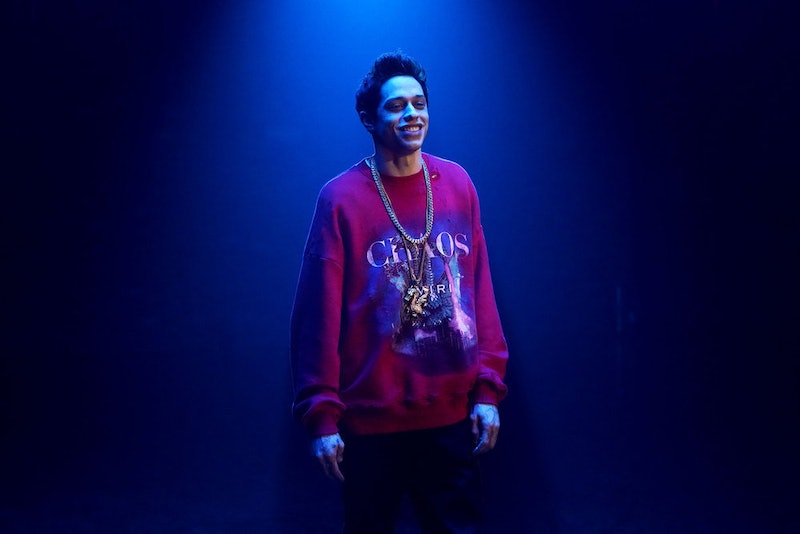 These days, it can sometimes feel like Game of Thrones is the only show that exists. As the May 19 finale quickly approaches, GoT is the series everyone is talking about. That was certainly the case for Saturday Night Live when Pete Davidson rapped about Game of Thrones during the Season 44 finale. Or, at least, so it seemed.

The tribute rap started out hilariously enough with Davidson giving some non-specific shout outs to the hit HBO series. When SNL cast member Kenan Thompson reveals his own GoT shirt and asks Davidson why he's never mentioned his fan status before, Davidson responds with a hilarious reference to his own life. "I really don't like to talk about my personal life, man," he said, potentially referring to his recent high-profile romances with Ariana Grande and Kate Beckinsale. "I don't like that attention." Both Davidson and Thompson give knowing glances to the camera.

After Davidson fails to register a cameo by Grey Worm actor Jacob Anderson, Thompson encourages him to pay homage to a show he actually loves. "Look, Pete, you don't have to do a rap about Game of Thrones just because it's the most popular show in the world right now."

Davidson is referring to Grace and Frankie's sex toy business for older women called "Vybrant." The three cycle through several storylines from the show including Robert's (Martin Sheen) sleep apnea, Grace almost sleeping with a married man, and Tomlin's onscreen romance with Ernie Hudson. Rudd also hilariously references Lisa Kudrow's Season 4 stint on Grace and Frankie. (For those who haven't dedicated their lives to Friends, Rudd's character Mike was married to Phoebe on the NBC comedy.)

This isn't Davidson's first tribute to under-the-radar legends. In January 2018, he and host Sam Rockwell rapped about actor Stanley Tucci in the aptly titled, "Tucci Gang." Fonda and Tomlin even make a guest appearance in the digital sketch wearing shirts that say, "I heart Pete" and "Pete Can Get It!" respectively.

Khaled and Davidson closed out their atypical tribute with, "Grace and Frankie, best in the game. We out." The Season 8 GoT finale may be coming, but fans' love for Grace and Frankie will only increase after this bop of an homage.

More like this
You’ll Definitely Recognise Both Of Ty Tennant’s Parents
By Maxine Harrison
'House Of The Dragon’s Theo Nate Is A “Massive” 'GoT' Fan
By Maxine Harrison
Viserys’ Fate On 'House Of The Dragon' Could Differ From The Book In This Surprising Way
By Grace Wehniainen
Nicola Coughlan Shared A Lady Whistledown Excerpt From ‘Bridgerton’ Season 3
By Grace Wehniainen, Alyssa Lapid and Sam Ramsden
Get Even More From Bustle — Sign Up For The Newsletter