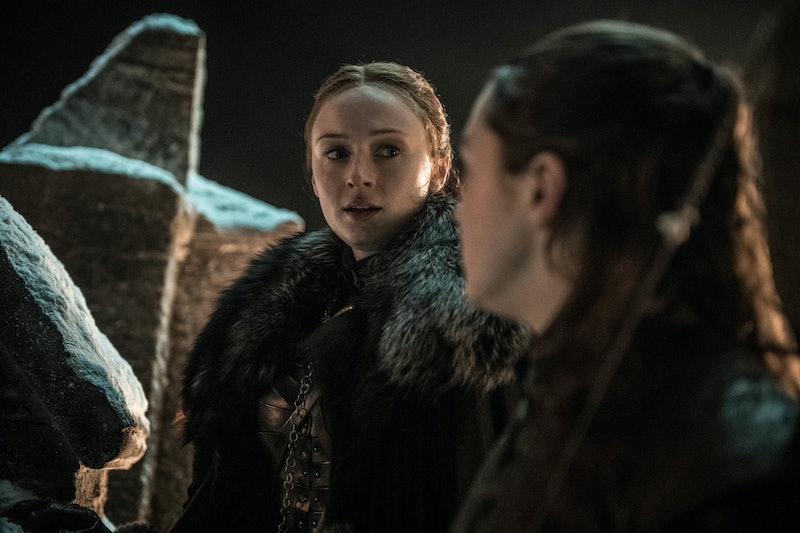 Sansa Stark is one of a handful of original characters from the very first season to make it all the way to the Game of Thrones finale. It's not been an easy or pleasant journey for the oldest Stark sister, but she's come out on top of all her struggles and become a formidable leader. As the final episode approaches, there are several Reddit theories about Sansa's fate on Game of Thrones, ranging from certain death to the Iron Throne, but it's still hard to pinpoint where she'll end up by the end of the next episode.

There are people who've been fans of Sansa from moment one she walked on screen. However, for others it was definitely harder to like Sansa. The first season introduced her as an annoying, spoiled girl who only really cared about her own wants and needs. Over the course of the seasons, however, her life became full of tragedy, starting with the death of her father, Ned Stark. Since Season 1, Sansa has been married against her will twice, the last time to a sadistic rapist who tortured her and killed her brother. And the fact that she's survived all that she's been through shows that she certainly has what it takes to make it to the end of GoT — and that's not something fans can say about just anybody. Her will to live and her certainty of purpose is what has kept her on top of the mind games that are the politics of Westeros, but, going into the final episode, her position of power in the North is tenuous at best, leaving Reddit users plenty of wiggle room to theorize as to what's going to happen to Sansa in the Game of Thrones series finale.

Sansa heads South after the Battle of King's Landing

Reddit user sarahisastark theorized that Sansa wasn't actually in Winterfell during the Battle of King's Landing, but actually on her way south. "I really believe Sansa is going to King’s Landing in secret and the only person who knows is Tyrion," the user wrote. "The reason Tyrion hasn’t turned on Dany yet is because that would go against the plan Sansa and Tyrion have cooked up to put Jon on the Throne."

Since Brienne was in charge of keeping Sansa safe, odds are, she'd also be joining her on the journey. The user also pointed out that "Sansa would do anything to protect her family and the North" and people's underestimation of her is what will hurt her enemies in the long run.

Another Reddit user Kurso suspected that Sansa will use Dany's political move of making Gendry Lord Of Storm's End for her own ends — again, with some help from Tyrion. "Sansa and Tyrion’s plan is to rally Westeros around [its] true king — Gendry Baratheon," they wrote. "This is the only way to save Westeros, give Jon what he wants (anything but the throne), and give Sansa what she wants (autonomy for the North)."

Sansa has the loyalty of the North, the Vale, and more, plus Gendry's humble beginnings (and the fact that he didn't burn down a city of millions) would get most of Westeros behind him. This would allow Jon to slip off and do his own thing, finally relieving him of any position of power. The theory also suggests that this will be a perfect time to wed Sansa or Arya to Gendry, to fulfill that Season 1 tease of joining the two families. "Either way a daughter of Ned Stark is marrying a son of Robert Baratheon in the final episode," the user wrote.

Another popular theory is that no matter what happens with the South, Sansa ends up as Warden of the North, as written out by user willbrown72. "So after all that, I think Sansa is trying to put Jon on the throne because he’s family, it would put her as Warden of the North over Daenerys who she’s doesn’t particularly like, and the North and King would have strong ties," they wrote. In this theory, Jon does end up on the Iron Throne, becoming a good king because of the fact that this was never a goal of his. And Sansa comes into her own as the Queen of the North, a position she's already shown she's more than capable of.

Sansa ends up on the Iron Throne

And, of course, fans on reddit are also fond of the idea that Sansa will sit on the Iron Throne. Reddit user aisforartichoke shared this popular theory. "[Sansa] keeps being played up as 'the smartest person in the room' despite just saying something helpful when everyone else is being shortsighted and idiotic," they wrote. "She considers how to actually take care of her people and make sure they have enough food, etc." With Cersei gone, Dany almost guaranteed to die, and Jon unwilling, it makes sense that Sansa would take the ultimate position of power.

Whatever happens to Sansa in the end, she's proven herself to be worthy of ending the show on top. Sansa deserves a good ending, so hopefully, she gets it.