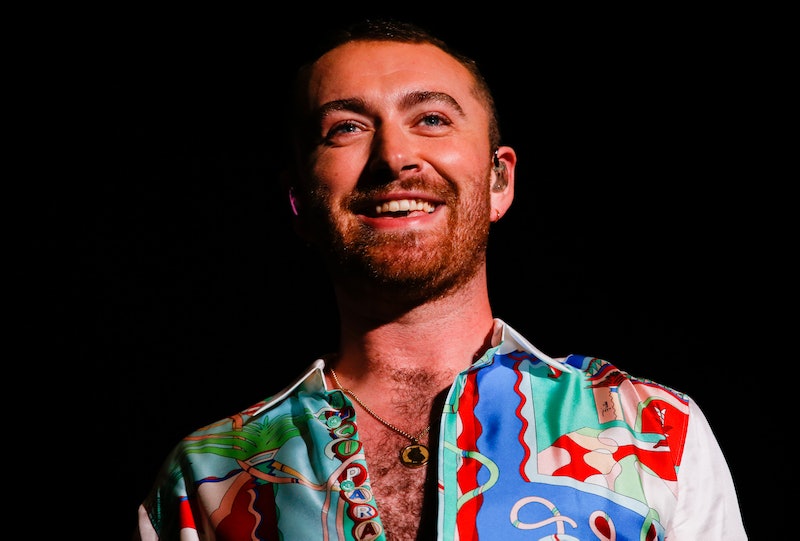 Sam Smith revealed in March that he identifies as gender nonbinary, and now the four-time Grammy winner is sharing more about his identity. Smith's new comments about coming out as nonbinary show what an emotional process it's been for him, and how supportive his mom has been through it all.

In British GQ's June issue, Smith talked about his coming out process, and how he learned to embrace his own gender identity. He told the magazine,

"Ever since I was a little boy, ever since I was a little human, I didn't feel comfortable being a man really. I never really did. Some days I've got my manly side and some days I've got my womanly side, but it's when I'm in the middle of that switch that I get really, really depressed and sad. Because I don't know who I am or where I am or what I'm doing and I feel very misunderstood by myself. I realised that's because I don't fit into either."

The singer also shared with British GQ that he's still choosing to use he/him pronouns publicly, but some of his closest friends and family are using they/them around him. "Right now, I'm he/him, but I'm also asking a few people close to me to say they and them," Smith said.

And in terms of his loved ones' reactions to Smith's embracing his gender identity, the "Stay with Me" singer shared a sweet story about his mom's reaction to the news.

"I was with my mum last night and she said something so beautiful," Smith told the magazine. "'I'm so relieved that you and me and your whole family have a way to explain this,' she said, 'because it's also been eating me up your whole life.' Because my mum could see it and that it was a torture going on in my mind."

Not only was Smith's mom supportive, but she was happy he'd found a way to express himself on his own terms. The singer may have only publicly come out as nonbinary a month and a half ago, but it sounds like it's been a lifelong journey for him to embrace who he is.

When Smith first talked about his gender identity on I Weigh with Jameela Jamil, he shared how hearing from other people who identified as nonbinary and genderqueer helped him realize that their statements were similar to how he felt.

"I've always had a bit of a war within my body and my mind… because I do think like a woman sometimes in my head," Smith said to Jamil, adding that he'd considered having a "sex change" in the past. "When I saw the word nonbinary, genderqueer, and I read into it, and I heard these people speaking, I was like, F*ck, that is me."

Smith and Jamil also talked about how body acceptance intersects with his gender identity, a topic that also came up in the GQ interview. It's a subject he's been open about in the past, but his words are a good reminder about how different aspects of people's identities are often intertwined.

It's nice to see Smith embracing who he is and to hear that his family is supporting him, too. He's been candid about being "depressed" in the past, but these recent interviews shed more light about his own experience. Fortunately, it sounds like he's doing better these days, and he's embracing exactly who he is.