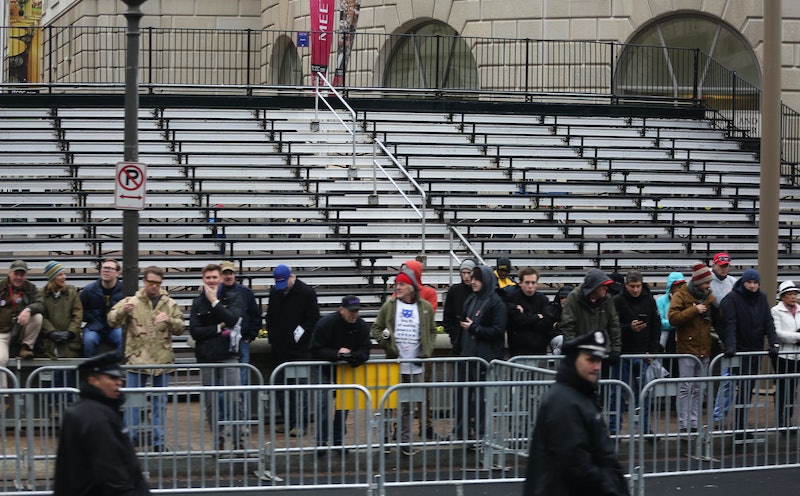 The White House has a problem. People keep sharing photos of how sparse Donald Trump’s inauguration “crowds” were. Sure, OK, he has a lot of problems, but this is one of them: He’s obsessed with numbers. Polls, money, you name it. He isn’t even comfortable talking about a woman’s beauty without quantifying it. So imagine how well it’s sitting with him right now that the Women’s March on Washington turned out possibly double the number of people as his own coronation.

Actually, we don’t need to imagine. He’s already telling us. At a press availability this morning, Trump claimed that as many as 1.5 million people showed up for his inauguration. At a press briefing later in the day, White House Press Secretary Sean Spicer declared that “This was the largest audience to ever witness an inauguration, period.”

Both statements are categorically wrong. Spicer got sloppy with his numbers, declaring that 420,000 passengers used the D.C. Metro yesterday compared with 317,000 who used it for Obama’s inauguration in 2012 — except he seemed to be comparing the total number of riders yesterday to how many people used the Metro on inauguration day 2012 … by 11 a.m. Moreover, by 11 a.m. on Saturday for the Women's March, ridership had outpaced Trump’s inaugural by 80,000 for the same timeframe.

None of these numbers are going to sit will with Trump, but clearly he’s happy to just make up his own. That’s fine. But we’re going to keep sharing the photographic evidence that says otherwise, and when he goes apoplectic, quietly ask, “U mad bro?”

First, you got your side-by-side crowd comparison photos, which are hard to argue with.

If regular side-by-side is too boring for you, there are also GIFs and slider features, too!

But Where Is Everyone?

Then we have the good ol' man-on-the-street-but-where-are-all-the-people pics.

And Finally, Pictures Of Empty Bleachers

Now that we know that Trump is so sensitive to having it be pointed out how much people don't like him — or maybe, more critically, how much less they like him than they liked Barack Obama — it's time to never let him forget it. He's governing on borrowed time.