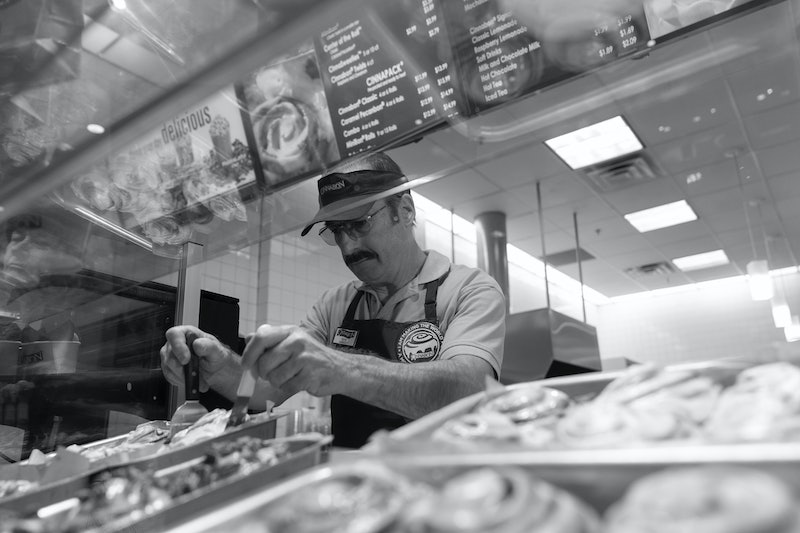 Spoilers ahead for the Better Call Saul Season 5 premiere. While the main character development of Better Call Saul is Jimmy McGill's evolution into Saul Goodman, the Season 5 premiere gave an extended glimpse of Saul's third identity — Cinnabon manager Gene Takavic. Gene's fate in Better Call Saul will also mark the end of Jimmy/Saul's character, as the penultimate season premiere makes abundantly clear. Gene decided to not get help from the Disappearer after being made by the taxi driver who drove him from the hospital in the Season 4 premiere. Because despite the new low-key identity, Gene is Saul to his core and he's going to go out with a bang.

Ahead of Season 5, Bob Odenkirk said that his character has an "inability to stay undercover" to TheWrap. "I don't think he can stand it. I think he's cracking up," Odenkirk added. Odenkirk's words came to fruition in the first few minutes of the Better Call Saul Season 5 premiere when Omaha cab driver and former resident of Albuquerque, Jeff, approached him at the mall and demanded that "Gene" admit he is really Saul Goodman. Gene hesitated for a moment, but he eventually gave in and quietly proclaimed his former slogan, "Better Call Saul."

While the cabbie was intimidating, Gene could have continued denying that he was Saul. But the other flash forwards have indicated that a large part of him has wanted to reveal his true (well, true-ish) identity. In the Season 2 premiere, he wrote, "SG was here," when he got locked in the trash collection area of the mall. In Season 3, after he helped mall security apprehend a shoplifter, he erupted and shouted out to the perpetrator to get a lawyer.

Saul had proclaimed that managing a Cinnabon in Omaha was his "best-case scenario" at the end of Breaking Bad. But this life of monotony and secrecy has been undoing his inner showman. He initially did the safe thing after his encounter with Jeff and called up the Disappearer at Best Quality Vacuum, Ed Galbraith. (Robert Forster also reprised his character in the Jesse Pinkman sequel movie El Camino and passed away just days after the film's release.)

As Better Call Saul has continually shown, Jimmy wants to be Saul no matter the cost. While he doesn't care about his reputation among his fellow lawyers, this pursuit will inevitably (probably?) end his relationship with Kim as their views continue to diverge in Season 5. With nothing to lose as Gene, he decides he'll take the risk of dealing with Jeff the cabbie and his pal on his own. "I'm gonna fix it myself," Gene told Ed as he slammed the phone down.

Showrunner Peter Gould spoke to /Film about the big Gene moment in the Season 5 opener, saying how this element of Saul's life is now a bigger story. While viewers will most likely have to wait until the sixth and final premiere to see more Gene, Gould didn't rule out a possibility for Gene to play a bigger part in future episodes. "Every time we've gone to that world, that black and white world in Nebraska, I've been really interested in what’s happening. So I think we're going to see more," Gould teased.

Slippin' Jimmy could work his Saul magic and get out of this Gene scrape for the end of the series. While that might be what fans want, it's more likely that Jimmy's last dip into his Saul persona will be his final free act. With Walt dying before authorities could capture him and Jesse getting his freedom in Alaska, Saul may be the only one to legally pay for the crimes of Breaking Bad. But he'll also be paying for the multitude of misdemeanors, shady dealings, and amoral behavior he has committed throughout his life. Because Better Call Saul is no redemption story for Saul Goodman — it's a tragedy and Gene's ending will be befitting of that.