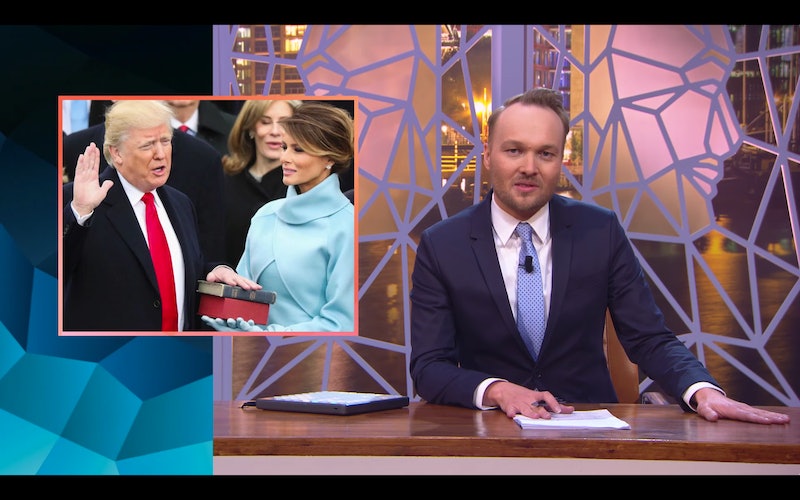 Donald Trump's inaugural address introduced a new slogan that looks like it will form the foundation of his foreign policy for the next four years: "America First." Far from inspiring instant fear or compliance, Trump's assertion of American dominance was met with some scathing satire from across the Atlantic. This hilarious Dutch news comedy sketch points out the flaw with Trump's "America First" message, which is very, very unlikely to produce its intended effect and may end up making the United States more enemies than friends.

The sketch is from a Dutch show called Zondag Met Lubach (Sunday with Lubach), which seems similar to The Daily Show or Last Week Tonight. A tourism ad parody appealing directly to Trump tries to get him to think of "The Netherlands Second" in his "America First" world.

“[Trump] had a clear message to the rest of the world: ‘I will screw you over big time.’ Well okay, he used slightly different words: ‘From this day forward. It’s going to be only America first,’" said host Arjen Lubach in the intro to the video. “And we realize it’s better for us to get along, [so] we decided to introduce our tiny country to him in a way that will probably appeal to him the most.”

The international satire is reassuring for those who don't support Trump, just to know that other people in the world see and recognize what's happening here, but the video also does a skillful job of highlighting exactly why Trump's message is problematic. The gaping logical hole in the "America First" message is that many people and governments around the world also think their country is the best. The whole idea of nation-states is predicated on loyalty, so when you start saying that your country is the best, no questions asked, people can get very defensive very quickly. National pride isn't a bad thing, but like most of his policies, Trump has taken it to an extreme that alienates people.

"America First" is a thing of the past (literally, it was the name of an isolationist group during WWII that sought to ignore the human rights abuses in Europe). And it will only lead the world backwards toward division instead of pushing everyone into a new era of peace and harmony.

Furthermore, Trump's message will never sufficiently connect with the American people because he's so wildly unpopular here. Given how entrenched many people are in their resistance to his administration, Trump's message could never amass significant support within the United States, giving it almost no power in other countries. Trying to get people to like you by getting them to hate something else is a classic bullying technique, but it's not going to work for him. Without support from his own constituents, he's never going to actually get the kind of response represented in the satire, even if that's what he's really going for.

Trump does actually have a history of screwing over the little guy, so the Dutch are right to be concerned with protecting themselves. But ultimately, the "America First" plan seems destined to fail before it even really begins. Trying to create national unity by furthering international division is only going to make it harder for the world to work together, which just puts more pressure on the United States to solve every problem. It's terrible foreign policy from both a practicality and morality analysis, and it looks like the rest of the world isn't buying it either.