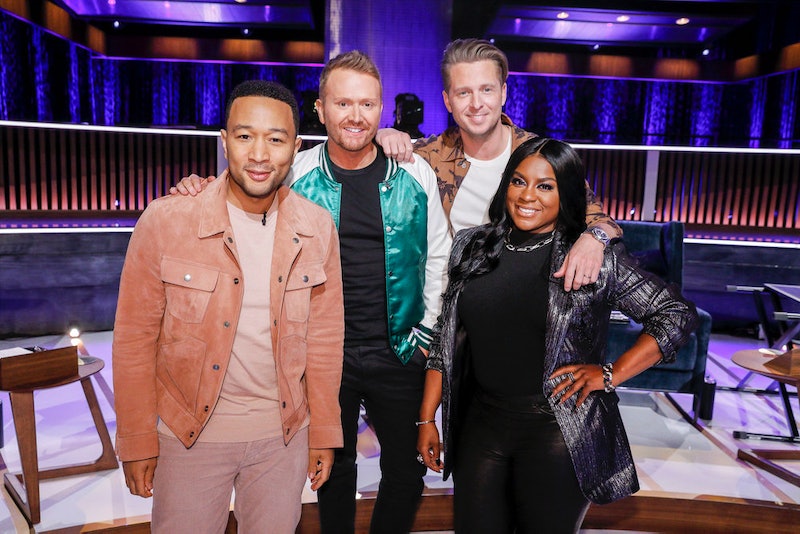 Songland is putting a new twist on the tried-and-true music competition genre by taking the focus off of performing and celebrating the writers behind the music. The songwriting competition is judged by three of the industry's biggest talents, each of whom have helped to shape the sound of pop music as we know it — even if you don't immediately recognize their names. Though not all viewers will be familiar with the Songland judges, it's likely that if you've listened to a radio at any time in the past decade, then you have heard a song that one of them wrote.

The judges are joined by various artists who will release and record the winner's song, including the Jonas Brothers, John Legend, Meghan Trainor, Macklemore, and several others. However, it seems that the judges themselves will be providing most of the feedback and mentorship to the contestants — and considering that they've collectively written tracks for Demi Lovato, Christina Aguilera, Florence + The Machine, Kelly Clarkson, Miranda Lambert, Camila Cabello, and Ed Sheeran, among others, it's safe to say that these rising songwriters will be in the right hands when it comes to guidance and advice.

Here's what you need to know about the judges.

Ryan Tedder is of the rare instances of a songwriter producing a hit song with their own project. His band OneRepublic found a great deal of success with their 2006 single "Apologize" but the most popular song with Tedder's stamp on it is Beyoncé's "Halo." Tedder's other hits include "Bleeding Love" by Leona Lewis and the Jonas Brothers' recent comeback smash "Sucker."

Ester Dean may not be a familiar name to some pop music fans, but she should be recognizable to any fans of the Pitch Perfect franchise, in which she plays Cynthia-Rose Adams. When she's not going a capella, Dean is writing huge hits like Katy Perry's "Firework," Nicki Minaj's "Super Bass," Rihanna's "Rude Boy," and Beyoncé's "Countdown." While she has comparable experience in the pop realm to Tedder, Dean is more well-suited than either of her fellow judges to offer insight into writing music within the R&B and hip-hop genres.

Shane McAnally has written songs for country icons like Reba McEntire, Tim McGraw, and Keith Urban, but his most notable collaborator is currently one of the biggest stars in country music. McAnally has been working with Kacey Musgraves since her first album Same Trailer, Different Park, on which he wrote her breakout hit "Follow Your Arrow." He also wrote songs for her albums Pageant Material and Golden Hour, the latter of which won a Grammy for Album Of The Year in 2019. McAnally is firmly rooted within the world of country, but it's clear he has experience writing country songs that also appeal to a broader audience outside of the genre.

Not every songwriter can become as successful as the Songland judges, but any fan of pop music will surely be interested in what they have to say about crafting a hit — especially the show's contestants.