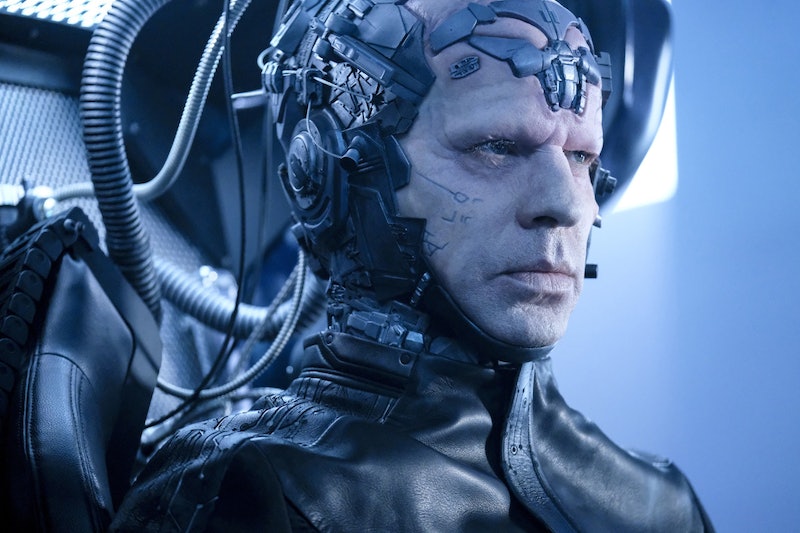 The Thinker has established himself as the big bad of Season 4 of The Flash and he's like nothing the show has seen before. For starters, the Thinker's powers are new to The Flash. Most season-long villains on the show have been speedsters: Zoom, Reverse Flash, and Savitar were all similar to Barry in that way. Meanwhile, the Thinker obviously has more intellectual capabilities than agility or strength. While the Thinker has been lurking in the background, making a cameo at the end of each episode, his true strength should be revealed soon. But until then, we can look at what we know of this Flash bad guy.

Since the Thinker is still fairly mysterious on the show, most of the information about the villain's potential powers comes from the comics. The Thinker has appeared in the comics in a variety of iterations, though his original form — and the name he also carries on The Flash — is Clifford DeVoe. Clifford DeVoe has a long history in DC comics, first appearing in All-Flash #12 in 1943. While not all of his powers may be given to the TV version of The Thinker, the comics can serve as a preview for what is to come, or at least what might be to come.

The Thinker's powers should challenge the good guys to get creative, as they will need to outthink him to survive.

The Thinker is an actual genius. Barry himself has always been extraordinarily smart, and his speed enhances this already natural intelligence. The Thinker, with his super intellect, is the first real super villain to be a match (if not beyond a match) for Barry's brain. Barry can't just outrun The Thinker, he'll have to tap into his other skill set. This new villain may allow the show to explore the capacity of Barry's mind.

Per ComicBook.com, producer Todd Helbing spoke at San Diego Comic-Con about how the Thinker's brilliance will come into play. He said:

"We always want to try to top ourselves whenever we can. But you know we've had three speedsters in a row, so we wanted to do something a little different, so this year it's The Thinker, and it's 'The Fastest Man Alive' versus 'The Fastest Mind Alive.'"

Recent episodes have stressed that the Flash isn't just Barry but the entire team, and perhaps this idea is the key to eventually defeating the Thinker. In the past Barry could just outrun his opponents, but the whole group will now have to put their minds together to defeat him.

On the show, The Thinker has already been shown wearing some sort of strange contraption attached to his head. This contraption is most likely his "thinking cap", which, in the comics, is the tool that gives The Thinker many of his powers. It's the source of his telekinesis and mind control. Telekinesis is the ability to move things physically through mental power, and mind control is, of course, the ability to control minds.

Perhaps this is why, on the TV show, The Thinker is tracking some evil metahumans, collecting them like puzzle pieces. He may be a villain that uses other metas to attack The Flash by controlling or otherwise getting into their minds.

In the comics, the Thinker is a computer whiz. The most recent episodic villain, Kilg%re, was a metahuman who could control technology. Kilg%re killed an enemy in one of the most brutal ways Cisco Ramon had ever seen: by using control of elevator technology to shake him to death. The Thinker at the end of the episode had video of Kilgore in prison, and his tracking of him means this may not be the last of Kilg%re's destruction.

While its unclear yet what The Thinker's relationship to technology is on the show, it is obvious he has a pretty decent understanding of tech. In the first episode of the season, the Thinker created a Samurai robot thing that brought Barry back to attention when it captured Iris The Thinker is working with The Mechanic, an evil genius sidekick who can build anything that the Thinker thinks up. The team has faced a lot of challenges, but a robot has never been a match for them before. And the Samurai was just a mere pawn of The Thinker.

The computers and technology in S.T.A.R. Labs has always given the Flash team a solid advantage against opponents. This may be the first bad guy that uses their tech savvy against them. Only time will tell how and to what extent The Thinker uses computers.

Every episode will likely reveal more information about the Thinker, his powers and his ultimate goal. But for now, his metas will be his envoys, and Team Flash will have to work backwards to figure out who they're dealing with.