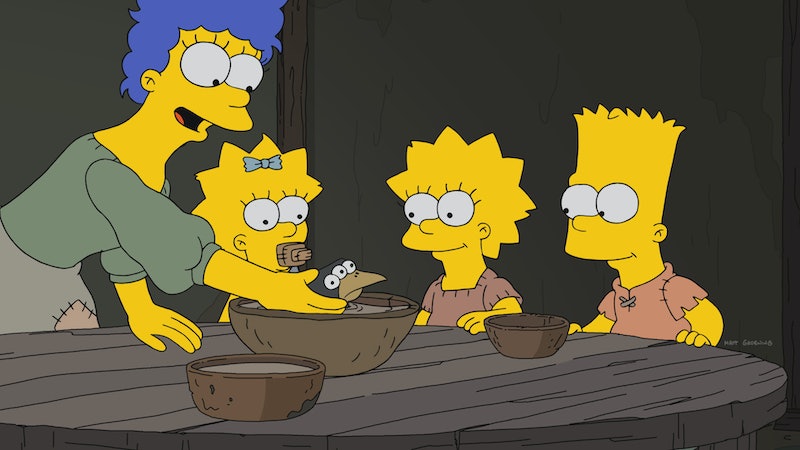 Instead of "very special episodes," The Simpsons prefers to mock pop culture with its themed episodes. For the Season 29 premiere, The Simpsons becomes The Serfsons and takes multiple stabs at the genre of medieval-themed fantasy. And, of course, The Simpsons spoofs Game Of Thrones in its fantasy-filled season premiere. No book, movie, or TV series is safe as The Lion, The Witch, And The Wardrobe and The Lord Of The Rings also get their fair share of mockery, but Game Of Thrones (or A Song Of Ice And Fire, for you purists out there) is the FOX cartoon's biggest target during the Oct. 1 episode. Although Homer and the family have parodied Game Of Thrones before, this time The Simpsons means business since Jaime Lannister actor Nikolaj Coster-Waldau provides the voice of Marge's brother for a quick incest joke. And there are plenty more Game Of Thrones references where that came from.

Although writer George R.R. Martin has been working on his A Song Of Ice And Fire series for what feels like forever, The Simpsons has actually been around longer than Martin's epic creation. As the elder series, it's only fair that The Simpsons should mock Game Of Thrones through its The Serfsons episode. And with Season 7 of the HBO series ending on Aug. 27, The Serfsons is fall TV's answer to the gaping hole in programming that Game Of Thrones has left. So as you continue to wait until possibly 2019 (!!) for the final season of Game Of Thrones, relish these spot-on Simpsons jokes — complete with a Jaime Lannister cameo — from the Season 29 premiere.

Rather than show all of the lands that make up Springfieldia, like Game Of Thrones does with Westeros in its opening credits, The Serfsons twists that idea a bit by giving a rundown of all the different types of people who make up the kingdom — from King Quimby, The First of His Name (which is a Game Of Thrones episode title), all the way down to "the lowest of the low," the Serfsons.

Marge may call it a crow, but there's no denying that the three-eyed crow soup the Serfsons eat is really a reference to the Three-Eyed Raven (watch yourself, Bran!). Plus, it ties nicely into The Simpsons mythology too with Blinky the three-eyed fish.

Severed heads were seemingly a staple of Medieval times. But when the Serfsons check out the new heads decorating the city walls, Game Of Thrones fans are understandably reminded of when Joffrey made Sansa look at her father's severed head on a spike. The Serfsons really drives the point home by having Ned Flanders be the featured severed head. Ned Flanders and Ned Stark? That's no coincidence.

The Serfsons may call them "Ice Walkers," but that's just a very thinly-veiled allusion to White Walkers. Better yet, the Ice Walker who infects Marge's mom looks exactly like the Night King. But this Night King is far less concerned with killing Jon Snow and way more interested in picking up the ladies.

When Homer resists saving Marge's mom, she is outraged and says she should have followed the advice of the witch who told her to marry her twin brother. Jaime Lannister actor Coster-Waldau provides the voice of Marge's twin (complete with blue beehive hair) in this moment that not only references Cersei and Jaime's incestuous twin love, but the storyline of Cersei seeking out the witch Maggy the Frog as a child.

A doomsday prophet looking remarkably like Martin walks outside of Moe's with the sign, "The end is not nigh, I'll tell you when it's nigh." As previously noted, Martin has not finished the book series on which Game Of Thrones is based on yet, and often delays when the next books will be released, so this blink-and-you'll-miss-it scene is taking the piss out of him.

Unlike the Iron Throne, which is coveted by many, Homer doesn't want the Iron Couch since he says that's where Marge will force him to sleep if he doesn't get the money to save her mom.

Even without phones, Bart is still able to prank Moe at his bar, thanks to a messenger raven. The raven delivers a scroll for My Lady Gwendoline Parts (is that you, Gwendoline Christie??) — prompting Moe to ask around the bar for "My Lady Parts."

At the Springfieldia Human Power Plant, Homer and his fellow serfs push a wheel that's not connected to anything. It's reminiscent of when Daenerys tells Tyrion, "I'm not going to stop the wheel. I'm going to break the wheel" since she thinks the wheel crushes the commoners.

Dragons are a staple of stories that feature mythological creatures, but the dragon that Rainier Wolfcastle rides on has a short-lived death similar to Viserion's in Game Of Thrones — especially since Marge's mom as an Ice Queen kills it.

When Marge tells Lisa that if magic didn't exist, people would have to make up fantasy stories, Comic Book Guy comes in to offer his commentary that most fantasy stories are just "pretenses for explicit sex and violence." And yes, that's undoubtedly taking a shot at Martin again.

The Simpsons Season 29 premiere provides enough jokes to tickle anyone's fantasy fancy, but, as these jokes prove, Game Of Thrones is the real winner (or loser?) of The Serfsons.