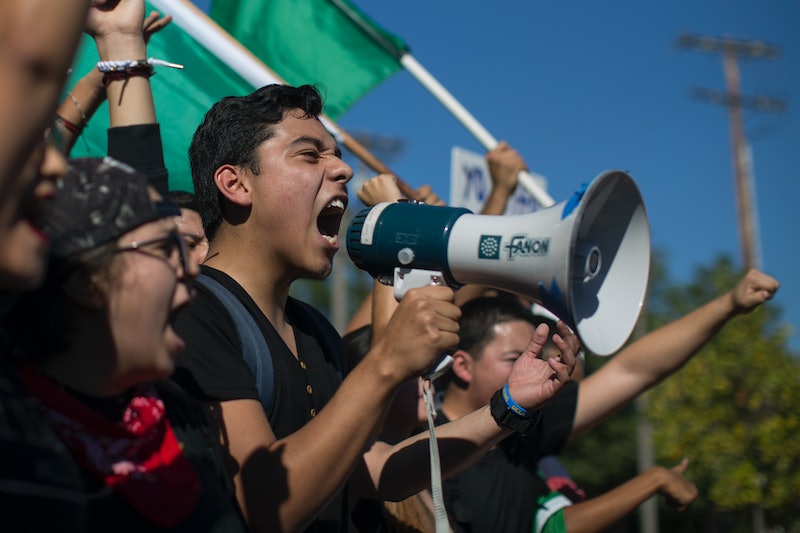 Students in Arizona may soon find themselves barred from learning about privilege, social justice or racial equality in school. A bill recently introduced by Arizona Rep. Bob Thorpe aims to nix discussions on those topics from the hallways and classrooms of public schools, all in an effort to protect students from potentially feeling "vilified." House Bill 2120 would expand on the state's already controversial restrictions on ethnic studies to include any course, event, or activity that could single out one race, gender, political affiliation, or social class in a negative way.

If passed, HB2120 would prohibit public K-12 schools and college-level institutions from including classes, events, and activities that "negatively target specific nationalities or countries," are "designed primarily for students of a particular ethnic group," or "promote division, resentment or social justice toward a race, gender, religion, political affiliation, social class or other class" in their program of instruction.

According to Thorpe, the bill doesn't ban classes on privilege, social justice, and racial equality outright, but rather proposes withholding 10 percent of state aid from institutions that are found to be in violation. "I'm not saying in my bill these classes cannot occur," Thorpe told Tuscon.com. "What I'm saying is taxpayers should not have to pay for them."

But while Thorpe claims the intent of HB2120 is not to ban classes that could "negatively target specific nationalities," the bill does not appear to differentiate between taxpayer dollars and state aid. Any institution offering classes, activities, or events deemed by the Arizona Board of Education to be a violation of the bill would risk losing vital state funding. Moreover, the bill's ambiguous language regarding exceptions for classes "that include the accurate history of any ethnic group" is concerning because it leaves the word "accurate" open to interpretation.

Further complicating matters is the fact that the original 2010 law HB2120 seeks to expand has since been suspended following a 2015 ruling from the 9th U.S. Circuit Court of Appeals, which stated the law illegally interfered with students' right to acquire information. The court also ruled there was evidence proving the law had been enacted for discriminatory reasons.

While critics of the bill have characterized it as an attempt to stamp out conversations on necessary topics like white privilege, social justice, and racial equality, Thorpe claims he's not looking to wipe out discussion on these issues altogether, but rather ensure those discussions are kept to the confides of historical facts.

"The conversation is perfectly acceptable," Thorpe told Tuscon.com. "Let's just ensure they're accurately discussed. What I don't want is somebody to be treated negatively and poorly because, for example, they are a Green Party member or they're a Democrat or they're a Republican." Thorpe said his intent was to put an end to classes and activities that create "a wedge issue" and may cause a person "to be vilified" for something beyond their control.

As insane as HB2120 is (it ends with a quote from Martin Luther King), it's unsurprising that it comes from a legislature who reportedly thought it would be a good idea to Photoshop his face onto a movie poster in which white men pose as Mexican cowboys or who recently found himself in trouble over a series of racially insensitive tweets. Perhaps Thorpe might consider sitting in on a class that tackles difficult and complex ideas like privilege and underlying racist stereotypes and leave defining education curriculum to educators.