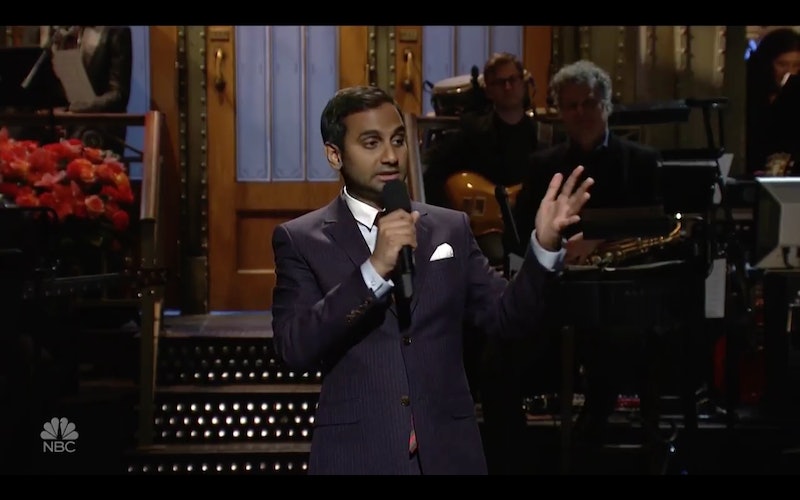 After the rollercoaster of emotions from Donald Trump's inauguration Friday, then the Women's Marches across the globe Saturday, some perspective on these historic times felt very necessary. Saturday Night Live, in its grand tradition of knowing exactly how to respond to these situations, came through for the country in its first post-inaugural episode. This one quote from Aziz Ansari's SNL monologue was the perfect way to frame Trump's inauguration and the resulting social blowback, and everyone who plans on resisting Trump should take his words to heart.

Nearing the end of his monologue, Ansari decided to get serious and talk about the Women's March, and thank goodness he did. "If you're excited about Trump, great. He's president, let's hope he does a great job," Ansari said first before addressing the other end of the ideological spectrum:

If you're scared about Trump, [...] you're gonna be ok too. Because if you look at our country's history, change doesn't come from presidents. Change comes from large groups of angry people, and if day one is any indication, you are part of the largest group of angry people I have ever seen.

There was a heavy dose of fatalism driving the election cycle and post-election activism, but Ansari's reminder in conjunction with the protests today can lift some of the burden.

The protests showed on a very large scale that people can come together and achieve things with the right motivation, which didn't seem as reliable a fact anymore after the election. That alone has been a huge relief, because real change doesn't seem like it can be too far away from that point.

Of course, that doesn't mean it's ok to stop fighting and turn the mantle over to others. You have to be as dedicated to creating change as you are determined to see liberal progress restored. But as President Obama said in his last White House press conference, "the only thing that's the end of the world is the end of the world," and it hasn't come to that yet. For over a year and a half, Trump's candidacy, rise, and Electoral College win have felt increasingly apocalyptic, but everything is still here. Everything is going to be alright in the end, so long as people work for it like they did at the marches on Saturday.

The forward movement of the United States has always faced challenges, but the people bounce back and persevere. In the grand scheme of things, this era is a blip. It happens to be a very annoying blip that everyone has to deal with, and people have to do all they can to make sure the country gets through it. But as long as that happens, there's really no reason to think Trump can change the trends of history on his own. Instead, it's you the people who will be in charge of that.