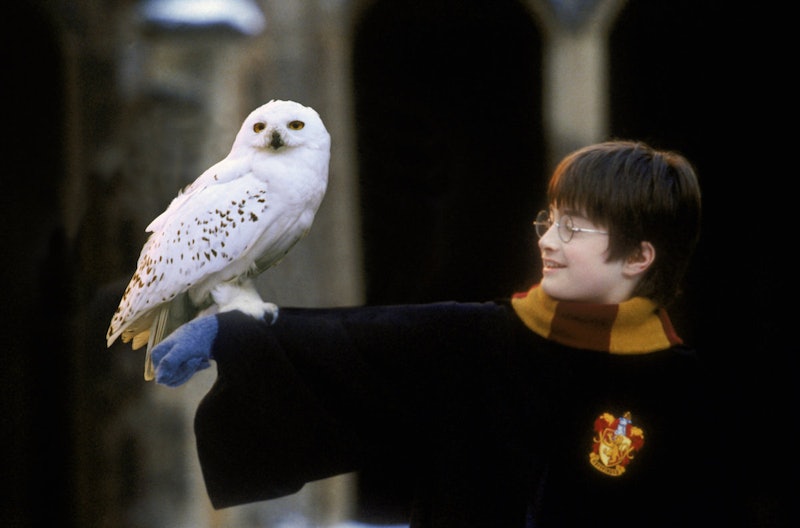 Brace yourselves, Potterheads, because I've got a doozy for you. This new Harry Potter fan theory suggests that Hedwig is the reincarnation of Lily Potter, and it's going to blow your mind (and maybe make you cry just a little).

Every Harry Potter fan knows Hedwig, the snowy owl whose theme became the most recognizable piece of Potter-related music shortly after Harry Potter and the Sorcerer's Stone hit theaters. Bought as an 11th birthday present for Harry from Hagrid during their trip to Diagon Alley, Hedwig was the Boy Who Lived's loyal pet and personal mail-carrier for six years. Hedwig died tragically during the Battle of the Seven Potters, when she was struck by a Killing Curse that Potterheads have assumed was intended to hit Hagrid, leaving Harry to complete his difficult struggle against Voldemort and the Death Eaters without her help.

It's the particular timing of the owl's demise that has some Harry Potter fans believing that Harry's pet was really the reincarnation of his mother all along. In a Reddit thread sourcing Potterheads' "outrageous" fan theories, Redditor Calvin9Hobbes9 replied to say that they thought of Hedwig as "a reincarnation of Lily Potter's protection and love." Other Redditors chimed in to add to Calvin9Hobbes9's theory, and they came up with some pretty compelling reasons to believe that Lily Potter sent an owl to protect her son.

Calvin9Hobbes9's fan theory about Hedwig centers on the fact that the owl acted custodially toward Harry:

So Hedwig always kind of seemed motherly to Harry. She would try to comfort him and reassure him (nipping at his hand etc.) and was there for him when he was stuck at the Dursley's. I always picture Lily Potter's patronus as a snowy owl instead of a doe and I think Hedwig is kind of like a reincarnation of Lily Potter's protection and love.

In a later comment, Calvin9Hobbes9 cites Lily's "independent" nature as a reason why her Patronus should not have been a doe: "I honestly just hate the idea that Lily had the female version of James' animagus as a patronus. She just seemed very independent and I just can't see a doe being her patronus."

Another Redditor, Max_Fart, observed that Hedwig's death came immediately after Harry's 17th birthday, when the blood-magic that had protected him throughout his childhood wore off. "I think you’re on to something," Max_Fart wrote.

Apparently, several other Redditors also thought Calvin9Hobbes9 was onto something. Someone posting under the handle Duvkav1 wrote, "I imagine that Hedwig was a 'reverse horcrux'. I.e. A by product of the sacrificial protection, that splintered part of Lily's soul and became Hedwig. [sic]" Another commenter, queenofthera, disagreed, writing:

This wouldn't make sense canonically. To split the soul is described as inhuman and generally abhorrent by the books. You can only split the soul by performing a heinous act.

I don't accept that Lily's soul was splintered in any way but I know what you're getting at. I'd argue that the protection itself would be the 'reverse horcrux' in this situation.

What do you think? Was Hedwig a manifestation of Lily Potter's love for her son from beyond the grave? Share your thoughts with me on Twitter!