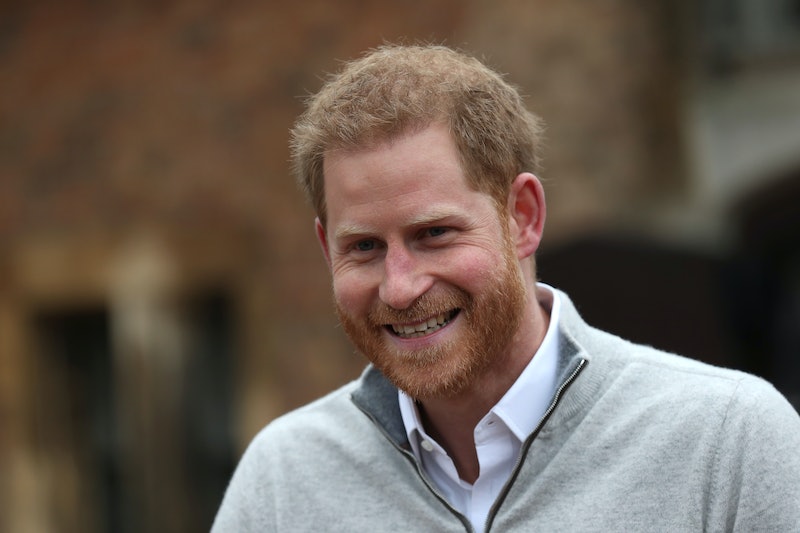 As you've likely already heard, Meghan Markle and Prince Harry welcomed a baby boy into the world on May 6. To announce the news, the Duke of Sussex himself spoke to the press, during which he highlighted just how strong women everywhere, including his wife, are when it comes to the birthing process. Prince Harry's speech about his baby has a lot of support from royal watchers everywhere, including that specific sweet shoutout to Markle.

According to a video shared on Twitter by Sky News, Harry detailed that Markle and the baby, whose name has yet to be revealed, are doing well. He also said, "It’s been the most amazing experience I can ever have possibly imagined," and continued, "How any woman does what they do is beyond comprehension."

Of course, there are absolutely no lies detected there, and, just as many on Twitter mentioned, it was so great to see the prince put the focus on the strength of women, including that of his wife. In addition to singing Markle's praises, Harry went on to thank all of the couple's fans, saying, "We’re both absolutely thrilled and so grateful to all the love and support from everybody out there. It's been amazing so we just wanted to share this with everybody."

As the duke said, there were many who were overjoyed to hear about Baby Sussex's birth. Unsurprisingly, there were just as many who were thrilled to hear Harry's forward-thinking, and incredibly adorable, comments about the royal family's new arrival.

This royal fan said that Harry became even more endearing after this royal baby speech, and they're definitely not wrong.

This user may not be the royal family's biggest fan, but even they can't help but love the duke's latest comments.

Yet another user was so touched by Harry's kind statements. Obviously, same here.

Not only did people love seeing the duke's joy over being a new dad, but they were so pleased to see him put the focus on his wife's amazing strength.

In response to Harry's speech, this Twitter user simply (and accurately) said that he was right in saying that women are incredible for childbirth.

Another fan of the royal family said that you have to "give it to prince Harry" as he's really a positive role model.

Princess Diana Would Be Proud

This person mentioned that Princess Diana would be so proud of her son in light of this special moment, which just puts another touching spin on an already sweet occasion.

As this fan said, Harry's recent comments made her day.

Does It Get More Endearing Than This?

This fan hit the nail on the head as they mentioned how endearing Harry was in his speech.

Based on all of these reactions, it's clear that royal watchers everywhere were thrilled to hear all of these details, straight from Harry himself, about the newest member of the royal family.