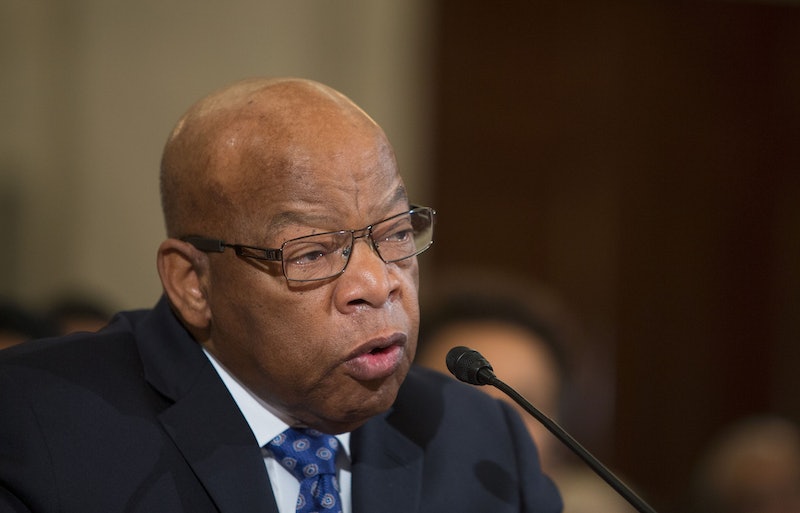 Ranking members of the Congressional Black Caucus joined together Wednesday to contest the confirmation of Sen. Jeff Sessions to the president-elect's cabinet as attorney general — and it's the line from Rep. John Lewis' statement during Sessions's hearing that mattered the most.

Lewis is known as one of the "Big Six" of the Civil Rights Movement, who took the lead on the movement that became known as "Bloody Sunday," otherwise known as the Selma to Montgomery march, where 600 participants were beaten by law enforcement during their peaceful protest to gain voting rights in 1965.

Now, he's taking that history and making sure it doesn't get repeated, with the reminder of what the "bitter fruits of segregation and racial discrimination" tasted like:

Any black person who did not cross the street when a white person was walking down the same sidewalk, who did not move to the back of the bus, who drank form a white water fountain, who looked a white person directly in the eyes, could be arrested and taken to jail. The forces of law and order in Alabama were so strong that to take a stand against this injustice we had to be willing to sacrifice our lives by a cause — often the only way we could demonstrate that a law on the books violated the higher law, was by challenging that law, by putting our bodies on the line and showing the world the unholy price we had to pay for dignity and respect.

In reference to Donald Trump's campaign slogan "Make America Great Again," a campaign that Sessions was first in line to get behind, Lewis said, "There are forces that want to take us back to another place. We don't want to go back. We want to go forward."

But of all the powerful things Rep. Lewis said there was one that stood out the most. Quoting A. Philip Randolph, Lewis recited:

Maybe our forefathers and our foremothers all came to this great land in different ships, but we're all in the same boat now.

He's said it before, and it bears repeating.

In his final plea, Lewis made the case for having an attorney general who has a clean history of treating people equally, and that line stands out as one that should make you pause and think about Sessions, Trump, and the whole situation.

No matter what boat you came in on, we're all in the same boat now.