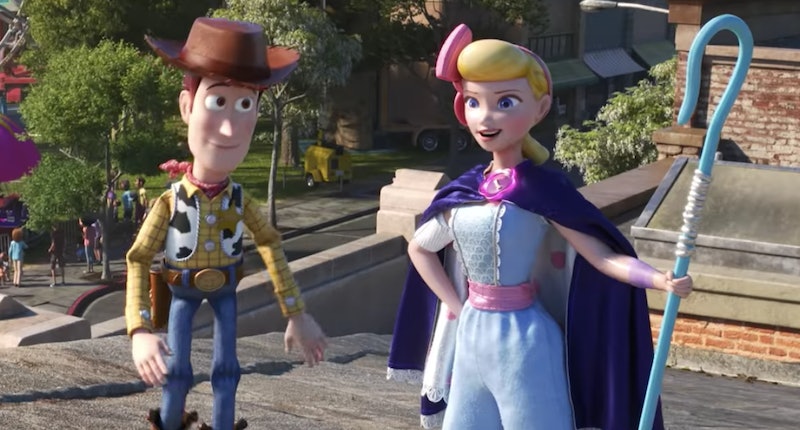 The release of Toy Story 4 is next month on June 21, but already, there are hidden details to look for in the movie. As reported by Entertainment Tonight, this Toy Story 4 Bo Peep easter egg has a behind the scenes connection to Toy Story 2. The opening sequence of the fourth movie in the franchise was screened for reporters at Pixar Animation Studios — and this easter egg can be noticed in a license plate.

The sequence, which takes place "Nine Years Ago," when Andy's sister Molly decides to discard her toy Bo Peep and her toy sheep flock. A car pulls up to pick up Bo Peep and her flock — and that car's license plate reads "RMRF97."What does that mean? Well, according to producer Mark Nielsen, it's a very efficient deletion command, rm -r -f * — and it was accidentally used on Toy Story 2 in 1997. "There was somebody that worked on [Toy Story 2] that accidentally deleted the movie from the render farm," Nielsen told reporters during the visit.

Rest assured, Toy Story 2 was eventually was recovered. Supervising technical director, Galyn Susman had left for maternity leave with a copy of the film in tow. "She had a backup of the film on her computer," Nielsen told reporters. "So, they backed [up] the whole thing, and they brought it back to Pixar from her computer that she had at home and restored it."

And that's not the only easter egg in Toy Story 4. Reporters were told at the set visit that there are easter eggs for every single Pixar movie in the antique store set, including a “Remember Me” record on an old gramophone. So fans will definitely need to keep their eyes peeled.

In addition, Toy Story 4 was referred to by a code name for the four years Pixar been working on it: "Peep." The new film focuses on a road trip in which Woody (Tom Hanks) reconnects with Bo Peep (Annie Potts), who's gone through quite a transformation since we last saw her. Gone is the frilly pink dress, this Bo Peep is now dressed in sensible pants, living her life as a lost toy in an antique mall.

Originally, Toy Story 4 was pitched as a love story, but the filmmakers say the actual movie, hitting theaters June 21, is an adventure movie with a sprinkling of romance. "So, there's a ton of adventure in it," director Josh Cooley said of Toy Story 4. "I think of, like, Raiders of the Lost Ark isn't a love story, but it has that great romantic element in it. I think of it more like that."

But, producer Jonas Rivera, compared Toy Story 4 to a different classic movie. “It was almost even a Lady and the Tramp analogy of, once out in the world, [saying], ‘Why wouldn't you want all this?’ And the other ones [saying], ‘No, I want to be at home,’" And Woody is that,” he said. “So, all the change he's done over the years, we thought she had the potential to change him more than anything ever has.”

And fans will have to see just how much changes when Toy Story 4 premieres in June.

More like this
The 50 Most Powerful Characters In The Marvel Universe, Ranked
By Johnny Brayson and Nola Pfau
Lin-Manuel Miranda & Tituss Burgess React To 'Little Mermaid' Casting Backlash
By Radhika Menon
Margot Robbie Breaks Her Silence On *That* Viral 'Barbie' Moment
By Maxine Harrison
20 Photos Of The 'Hocus Pocus' Cast Then & Now
By Radhika Menon
Get Even More From Bustle — Sign Up For The Newsletter