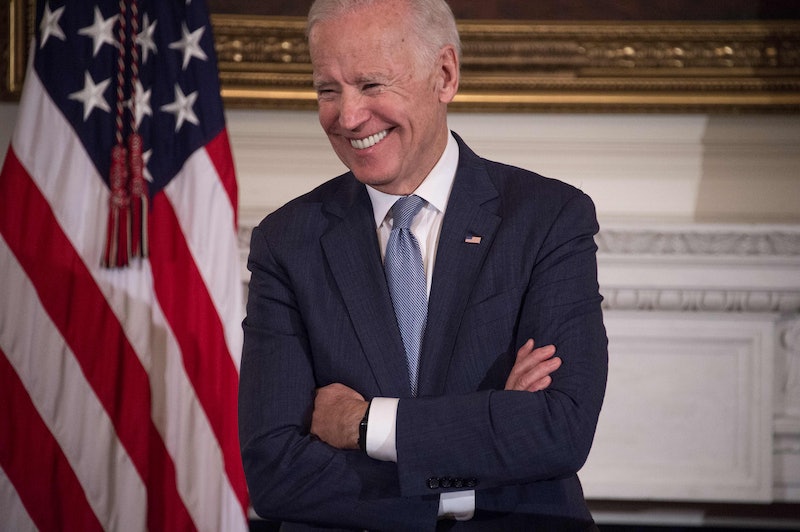 When Donald Trump won the election last November, everyone knew things were about to get out of control — but nobody could have foreseen the uptick in humorous social media posts that would accompany it. Twitter's most recent target in the Trump administration is the soon-to-be-president's title, and in typical petty Twitter fashion, they want to pull the rug out from under him. That's why this hilarious Twitter plot to make Joe Biden the 45th president before Trump's inauguration is so funny — because nothing would piss The Donald off more than having to throw away a bunch of Trump merchandise.

The joke appears to have originated before the election — in October, popular Twitter user Andy Levy innocently tweeted that President Obama should resign on his last day in office, so as to give his bff Biden the chance to be president for a day. After the election, Levy's tweet went viral, and made its way to Tumblr, where it gained a life of its own when people began pointing out that it would make Trump's pre-printed "45th president" memorabilia obsolete. Soon after the post garnered hundreds of thousands of notes on Tumblr, it made its way, as all things must, back to Twitter. The rest is history.

Fantasizing about White House practical jokes ahead of the incoming Trump administration is nothing new: soon after the election results were confirmed, memers took to Twitter and Instagram to express their shock in the only way they know how — with humor. All the memes painted Biden as the West Wing's resident jokester, and one played on another of 2016's funniest memes when it joked that Biden made all the doorknobs too large for Trump's "tiny hands". Trump, to no one's surprise, has defended the size of his hands.

If this hilarious plot were to be undertaken in an absurd House of Cards-style coup, it would make Biden the second vice president to rise to the presidency in the case of presidential resignation (the first was Gerald Ford, who became president after Richard Nixon resigned in 1974).

While there's little-to-no chance that a class act like Obama would engage in such presidential pettiness, it's still hilarious to imagine Trump fuming at being one-upped by Biden. Our favorite buddy-comedy sitcom duo is leaving the White House, but we'll always have the jokes we made about them to keep us warm in the coming dark ages.