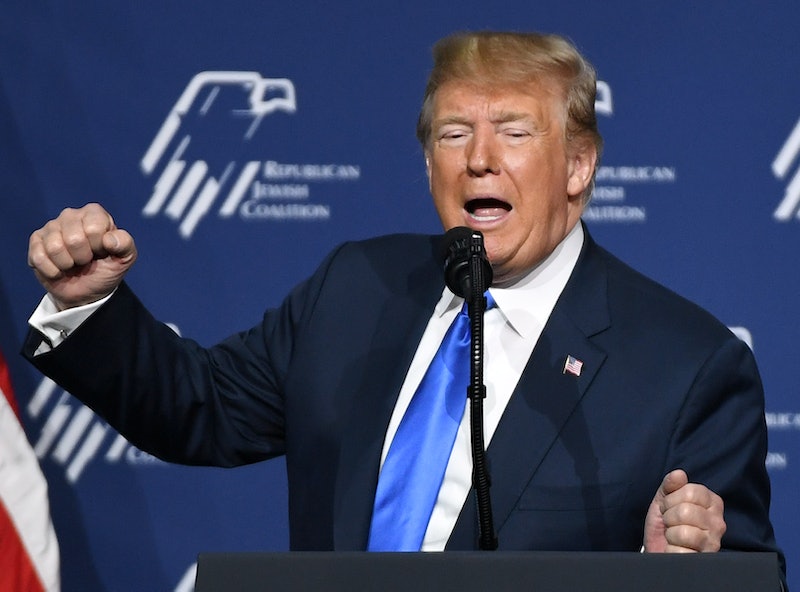 In June, President Donald Trump signed an executive order to officially end his administration's policy of separating migrant children from their parents when the families were apprehended along the U.S.-Mexico border. But according to a new report from NBC News, Trump wants to reinstate his family separation policy. In fact, the president's insistence on bringing the policy back may have even been what led Department of Homeland Security Secretary Kirstjen Nielsen to resign, the report noted.

Multiple officials reportedly told NBC News that Trump has been advocating for his administration to resume its policy of separating migrant families at the border since January, when the number of undocumented immigrant crossings began to rise. One senior Trump administration official reportedly told NBC News the president appears to be convinced that separating migrant families has, so far, been the administration's "most effective policy" for deterring asylum seekers. Bustle has reached out to the White House for comment.

But according to NBC News, Nielsen had been "resisting" such a policy change. She reportedly pushed back on Trump's calls to reinstate the policy with reminders that there were federal court orders blocking the policy as well as an executive order he'd signed to end it. According to the news outlet, the issue put her and Trump "at odds" and may have contributed to Trump's desire to see her step down as Homeland Security secretary.

In June, Trump announced he'd signed what he felt was "a very important executive order" — one that replaced the administration's policy of separating families with one requiring migrant families be detained together "where appropriate." At the time of the signing, Trump moved to downplay his support for his administration's initial policy.

"I didn't like the sight or the feeling of families being separated," the president said, according to a White House-provided transcript of his remarks at the signing ceremony. "So we're going to have strong — very strong borders, but we're going to keep the families together."

Trump announced Nielsen's resignation over Twitter on Sunday in a short statement that did not expand on why she was leaving her post. "Secretary of Homeland Security Kirstjen Nielsen will be leaving her position, and I would like to thank her for her service," the president tweeted.

On Monday, Nielsen told reporters she still shares "the president's goal of securing the border" and would "continue to support all efforts to address the humanitarian and security crisis on the border." She has yet to announce what she plans to do now that her tenure as Homeland Security secretary is over.

According to NBC News, McAleenan has yet to rule out reinstating family separations — in one form or another — as official DHS policy. Officials reportedly told NBC News that the incoming acting Homeland Security secretary would likely mull over a policy that would allow migrant parents to choose between keeping their children with them in long-term detention or allowing the government to separate them.

McAleenan also previously defended border patrol agents' use of tear gas on migrants who'd rushed the border in Tijuana as a justified response to what he characterized as an "assaultive" crowd, The Washington Post reported in December. "I think it's remarkable that agents were able to resolve the situation without any serious injuries or a breach of the border," the paper reported he'd told members of the Senate's Judiciary Committee.

On Monday, 2016 Democratic presidential candidate Hillary Clinton condemned her former rival's immigration policies. "Let's be clear," she tweeted. "This administration's dehumanization and cruelty toward migrants will not stop after Kirstjen Nielsen leaves office. It is their principal policy."